Campaign to end asbestos in Indonesia intensifies as imports increase

New data suggests Indonesia is the second highest importer of asbestos in the world and consumes 17% of asbestos traded around the world. Union Aid Abroad – APHEDA works with our partner organisations the Local Initiative for OHS Network (LION) to support training and campaigns to raise awareness of the dangers of asbestos and work with the Indonesian Ban Asbestos Network (INA-BAN).

Challenges to winning an asbestos ban in Indonesia include the size of the country and decentralisation of many government functions, a lack of awareness of the dangers of exposure to the substance and the influence of the asbestos lobby on policy makers. The Fibre Cement Manufacturer Association (FICMA) promotes its pro-asbestos agenda with ministries and claims that chrysotile asbestos is safe to use.

The campaign in Indonesia now also highlights the dangers of asbestos exposure during natural disasters. Like in Australia, asbestos building products that may be considered ‘stable’ in houses or other buildings are destroyed or disrupted during natural disasters such as earthquakes, storms or fires and community and relief workers are exposed to asbestos fibers. LION and INA-BAN are collaborating with the World Health Organization, the Red Cross, the Ministry of Social Affairs and the National Agency for Disaster Management to improve awareness and procedures for social workers and others to avoid exposure to asbestos in disaster sites.

As in Australia when the 2018 bush-fires in Tarthra NSW exposed 6000 tonnes of fire-damaged asbestos waste for removal, in disaster-prone Indonesia asbestos is adding danger to communities already suffering loss and destruction. By targeting the issue of disaster related asbestos exposure, INA-BAN is seeking to bring a broader awareness of the asbestos exposure issues and build allies in the campaign to end asbestos use and asbestos related diseases. INA-BAN is also campaigning for improved compensation system for occupational diseases and regional and national bans on asbestos. 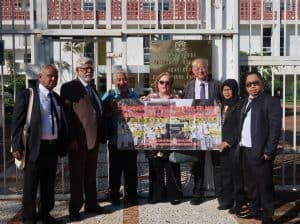 Mission members and ABREA hosts Eliezer João de Souza and Fernanda Giannasi (in the middle) outside the Russian Embassy in Brasilia April 24, 2019 after delivering a letter for the Russian Ambassador.

Indonesian activists take the fight to Brazil and Geneva

Activists from INA-BAN joined delegations to Brazil and Geneva in May this year. The delegation to Geneva lobbied for a change to the Rotterdam Convention on hazardous chemicals. Brazil is facing a critical moment in the campaign to end asbestos use. In November 2017 the Supreme Court declared the commercial exploitation of asbestos unconstitutional, however as asbestos use is ceasing in Brazil companies are looking to other markets for asbestos. Activists met with trade unions and victims associations. They protested the continued export of asbestos from Brazil to countries like Indonesia and asked – if asbestos is too dangerous for Brazil, why isn’t it too dangerous for the people of Asia?

Get behind the push to ban asbestos in Indonesia!

The campaign in Indonesia continues to grow as more allies join the fight. Unions that have worked with INA-BAN and participated in training run by Union Aid Abroad – APHEDA are distributing more information to their members about asbestos to place pressure on employers and decision-makers to secure safe workplaces.

You can support this work by becoming a member of Union Aid Abroad – APHEDA and joining the fight to end asbestos in Australia, our region and around the world.