Democratic space in Cambodia has shrunk further with the passing of controversial changes to Cambodia’s Law on Political Parties on 15 February. The Cambodian National Assembly has approved legislation prohibiting those convicted of crimes from leading political parties, and allows the Ministry of the Interior to dissolve political parties that threaten “national unity”. It also prevents political parties from accepting donations from overseas, a clause designed to curb the influence of the Cambodian diaspora.

The legislation is designed to render powerless the Cambodian National Rescue Party (CNRP), the principal opposition party to the ruling Cambodian People’s Party (CPP). CNRP leaders have been targeted by the Government for a range of criminal prosecutions, including defamation. In protest against the amendments, CNRP boycotted the National Assembly session when the legislation was passed.

Cambodian civil society groups have been outspoken in their opposition to the amendments. The Electoral Reform Alliance (ERA) released a joint statement vehemently protesting the proposed amendments, with signatories including the Cambodian Centre for Human Rights. “[The amendments] will make it possible for the acting government to suspend and dissolve political parties, effectively removing their leadership from politics. It is considered to be politically motivated and aims at preventing competition from the activities of opposition political parties in the upcoming election in 2017 and 2018,” ERA said in a statement released shortly before the legislation was approved.

The shrinking of space for dissenting voices in the political sphere is particularly alarming as it comes after months of intensifying restrictions on the most active and visible voices in Cambodian civil society, including independent trade unions. A controversial Trade Union law passed in April 2016 put age, residency and literacy requirements on prospective union leaders and undermined workers’ rights to free association and the right to organise. This was followed in November 2016 by the release of a new expanded minimum wage law with a range of clauses of deep concern to labour unions and non-government organisations (NGOs). The law proposed heavy fines for anyone who “create[d] obstacles or put… illegal pressure on discussions to determine the minimum wage” or who “incite[d] activities against the declaration of the minimum wage”. Mr Sok Kin, Deputy President of the Building and Wood Workers Trade Union Federation, told the Phnom Penh Post that these clauses were “designed to restrict independent unions’ activities.”

NGOs and political activists have also been targeted. A 2015 law on NGOs introduced complex requirements for NGO registration and was criticised for limiting the space for NGOs to work and advocate for the poor and marginalised. Meanwhile, there have been ongoing arrests and imprisonment of human rights defenders and activists. In July, Dr Kem Ley, a respected social and political analyst in Cambodia, was fatally shot in the street in central Phnom Penh. More than 81 non-government organisations, including Union Aid Abroad – APHEDA, publicly condemned the murder and called on the Government to initiate an independent enquiry to bring the culprits to justice.

Union Aid Abroad – APHEDA remains deeply concerned about the shrinking space for democratic debate and for informed, outspoken civil society to speak publicly on issues of significance in Cambodia. 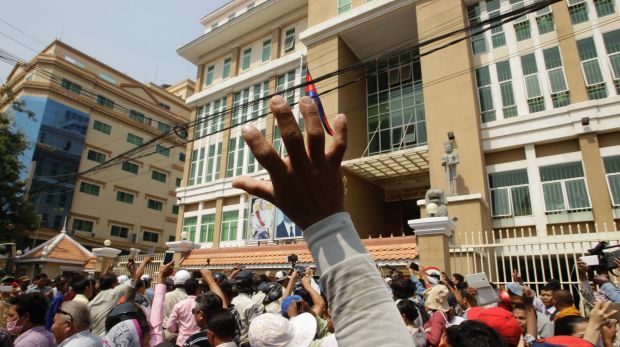