Building union power through clean energy in the Philippines

Through partnering with SENTRO in the Philippines, Union Aid Abroad – APHEDA has been supporting the campaign to fight back against privatisation of the energy sector. SENTRO is building a nationwide movement to show that social ownership through energy cooperatives is beneficial for workers, for the environment (clean energy) and for the people (affordable electricity). 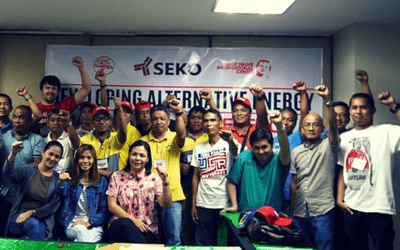 The problem: unaffordable electricity and dirty energy in the Philippines

SENTRO (Sentro ng mga Nagkakaisa at Progresibong Manggagawa) is a union centre that has over 80,000 members across a range of industries including the power sector. They have strong unions in the 121 electric cooperatives that provide power to almost 50% of Filipinos and are the last part of the energy system not to be privatised. Oligarchies have benefited from privatisation of the energy sector. Energy generation is primarily sourced from imported coal and huge expansions are planned. Electricity is unaffordable, with the Philippines having one of the highest prices in Asia; 20% of the population have no access at all. The oligarchs now have their sights set on privatising the electric cooperatives.

The solution: a new business model based on renewable energy and social ownership

However SENTRO and their members in electric cooperatives are fighting back! They want to protect and expand good union jobs and provide affordable and reliable electricity to communities. In order to build their case they partnered with Union Aid Abroad – APHEDA to undertake a background feasibility study into cooperatives embracing renewable energy generation as part of a new business model. The study has demonstrated that the cooperatives can expand into solar, wind and micro hydro generation and in doing so rejuvenate their business model (currently the cooperatives distribute retail electricity and purchase from large private generators who have monopoly on price).

The future: jobs, affordable electricity and a transition to clean energy

The next phase of the project will see SENTRO and their members working with a number of cooperatives to embrace clean energy and provide case studies of what is possible. They will use the rejuvenated clean-energy powered electric cooperatives to build an alternative narrative against the pressure for privatisation. In doing so, they will build a nationwide movement to demonstrate how social ownership through the electric cooperative can:

Mr Josua Mata, Secretary General of SENTRO will be an international guest at the upcoming 2018 ACTU Congress in Brisbane.