Conflict, COVID-19 and mass displacement on the Thai-Myanmar Border

As the people of Myanmar continue to deal with the fallout of the military coup which took place on 1 February 2021, the situation for the people of Shan State and Karen State continues to deteriorate. Conflict is nothing new for our partner organisations working along the Thai-Myanmar border. However, they are now dealing with multiple crises – escalation in conflict, the ongoing threat of COVID-19, a worsening humanitarian emergency and mass displacement. 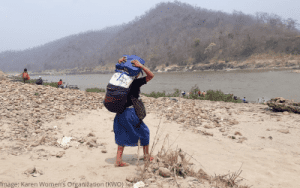 Responding to the situation on the Thai-Myanmar Border

The Karen and Shan have lived with conflict and armed struggle for 70 years. In recent months, there has been an escalation of conflict – predating the current military coup in Myanmar on 1 February 2021.Throwing the ongoing threat of COVID-19 into the mix as well as the current coup, the situation has continued to deteriorate. Yet APHEDA’s partner organisations on the Thai-Myanmar border continue to deal with crises and instability as they respond and work closely with the communities they represent and support.

Union Aid Abroad – APHEDA works with the Karen Women’s Organization (KWO), the Mae Tao Clinic, the School for Shan State Nationalities Youth (SSSNY), and MAP Radio run by the Migrant Assistance Program. As shocking as recent events have been, dealing with multiple crises is neither unprecedented nor particularly unusual for our partner organisations. What is remarkable though is their achievements despite the challenges.

Rights and conditions of refugees in Thailand

There are about 92,000 refugees from Myanmar, mostly Karen, Karenni and Burmese, who live in nine camps along the Thai-Myanmar border. Many are long-term refugees fleeing the aftermath of a failed uprising against Burma’s military regime in 1988. Thailand has no legal framework in place for asylum seekers and refugees and is not a signatory to the 1951 UN Convention. As a result, refugees have no legal right to stay in Thailand and are treated as illegal migrants, placing them at risk of arrest and detention unless they are residing in a designated refugee camp. Life in the camps has been precarious but worsened when international donor funding and international attention drifted away from refugees and toward peace building following a ceasefire agreement in 2015. However, despite the agreement, conflict continued inside Myanmar between the Burmese military and ethnic armed groups. Regardless, Thailand and the UNHCR were pushing a voluntary repatriation plan to try to encourage refugees to return to Myanmar. Many refugees deemed it unsafe to return because of the ongoing conflict. Yet it was also difficult to stay as rations were being cut in the camps. Watch the 2017 short documentary, ‘Difficult to Stay, Difficult to Go Home’.

The last few months have been rife with crisis and instability for Karen communities in Karen State and along the Thai Myanmar border.

In January 2021 a second wave of the COVID-19 pandemic took hold in Thailand and continues to spiral out of control, threatening the most vulnerable. Refugees along the border remain vigilant and continue to implement prevention measures.

Meanwhile, armed incursions by Burmese military reignited armed resistance movements, displacing large numbers of civilians who have fled for their safety. Since 1 February 2021, ongoing conflict and COVID-19 are running alongside a military coup in Myanmar and a growing mass civil disobedience movement. The state-sponsored violence used against civilians in Myanmar’s ethnic areas for decades is now on full display in its major cities as the junta attempts to shut down strikes, demonstrations and all opposition by any means. Many people from cities in Myanmar have now fled to the border region seeking safety and training from armed ethnic groups.

In Mutraw District in northern Karen State, fierce airstrikes have resulted in dozens of civilian casualties and displaced nearly 90% of the district’s population (more than 70,000 people). This has triggered a humanitarian crisis with a new wave of refugees seeking safety in Thailand. The Karen Peace Support Network (KPSN) released a new report in May 2021 called ‘Terror From The Skies: coup regime’s escalated offensives cause mass displacement across Mutraw’. This report calls on Thailand to stop forcing refugees back to Myanmar and to grant refugee and humanitarian access to all who are fleeing the attacks by the Burma Army. 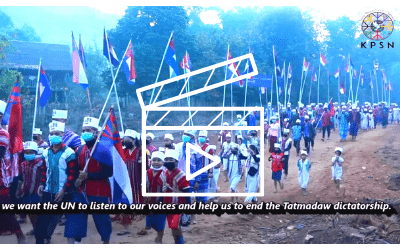 Shan State is the largest state in Myanmar, taking up more than a quarter of the country’s land mass. Like the Karen, the Shan have lived with conflict for 70 years and the current escalation in armed attacks are nothing new.

COVID-19 and conflict: a perfect storm

Currently, rates of COVID-19 infection are low among refugees along the Thai-Myanmar border but these communities are at highly vulnerable and caught between major outbreaks in both Thailand and Myanmar. Inside Myanmar, COVID-19 responses have collapsed. Myanmar’s health system was already severely under resourced after decades of neglect under military rule and is now faced with a general breakdown in the basic infrastructure the it relies on to function. A mass movement of people fleeing conflict heighten fears of a deadly third wave of COVID-19, with the UN calling it a ‘perfect storm’.

In Thailand, a second wave has already begun, with infections reaching just under 4000 per day on average with infections increasing, mostly amongst poor and vulnerable populations. Apart from the risk of infection, travel restrictions in Thailand and lockdowns have seen refugee camps cut off from essential supplies, as well as access to jobs and services, resulting in food shortages and broader health risks.

Further adding to concerns, is the shocking reality of direct attacks by the Myanmar military on health staff and health facilities.

“There have been at least 158 reported attacks on medical personnel and facilities in Myanmar, with more than 139 doctors arrested and charged since the military coup in February, endangering not only vital health services but also the COVID-19 response…” UN Country Team (UNCT).

While the United States, the United Kingdom, Canada, New Zealand and the European Union have directly targeted military rulers with sanctions, freezing access to assets and barring trade, the Australian government has been accused of ‘shameful inaction’. Doing little to punish or constrain the military junta, the Australian government is proceeding with a regional trade deal that signals reward, through a wiliness to trade, a move condemned by the ACTU, which states:

“Workers and trade unions are being targeted by the military junta – workers have been killed, arrested and intimidated for participating in peaceful protests and strikes; sixteen unions and workers’ organisations have been declared illegal; and many union leaders are being hunted by the military and have been forced into hiding. The Morrison Government should be introducing sanctions and suspending ties with this brutal dictatorship – not deepening ties through a new trade agreement.”

On 18 May 2021, 390 civil society organisations from Myanmar wrote a letter to Australia’s Foreign Minister, Marise Payne. The letter – reported on in The Guardian – outlines the shock felt by those in Myanmar regarding Australia’s continued inaction in Myanmar. The letter ended with the civil society organisations demanding Australia take the following steps: 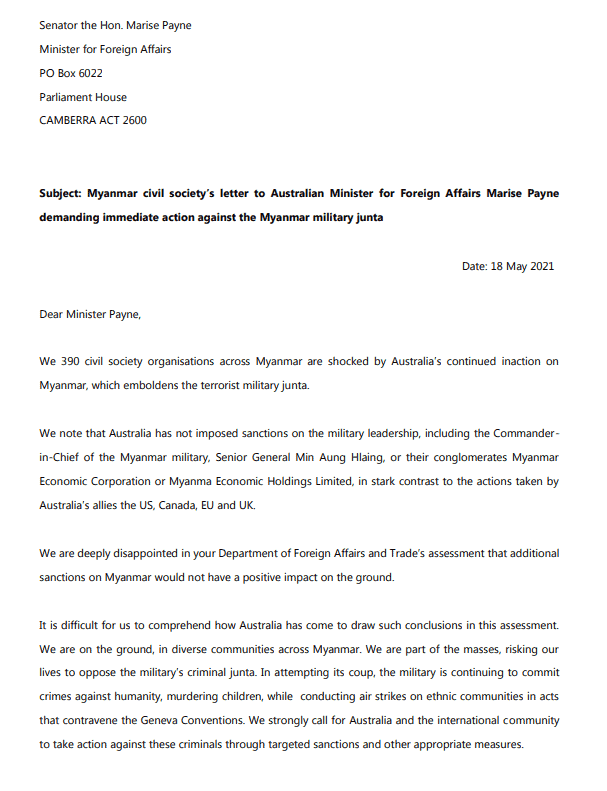 Union Aid Abroad – APHEDA has stood with civil society organisations, trade unions and activists in Myanmar and on the Thai-Myanmar border for over 25 years as they have struggled for peace and democracy. We must continue to stand with them now.