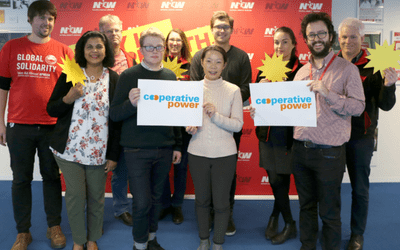 Cooperative Power is a newly formed cooperative for Australia’s energy sector. Union Aid Aboard – APHEDA is one of the founding members. This new model takes the power back from huge energy corporations for the benefit of people and our planet. It’s a new way for people to buy energy and have a say in how it’s created and how much it costs.

Cooperative Power is a way for us to come together and create an energy sector that is clean and sustainable, affordable and democratic. As the cooperative grows it will look to redistribute funds to ensure all members benefit from renewable energy opportunities. It will also support the climate justice movement, including APHEDA’s work across the Asia – Pacific region.

Union Aid Abroad – APHEDA members can register their interest to accesses the service and become part of the movement here: www.cooperativepower.org.au

Power bills on the rise? The solution is in workers’ hands

“Workers have the solutions, and through coming together through Cooperative Power we can take back the commons, combat cost of living pressures and ensure an inclusive transition to clean energy for all workers,” said Godfrey Moase –  Assistant General Secretary National Union of Workers (NUW), and chairperson of Cooperative Power.

Australia’s big three energy corporations are behind skyrocketing inequality due to increasing power costs. They are also the biggest carbon polluters, fuelling dangerous global warming. Australia is still one of the highest carbon polluters per person and these impacts are felt most by workers in insecure jobs, women, indigenous peoples and low-income communities across our region. Cooperative Power provides an avenue for workers and diverse communities to come together and organise for the world they want.

As part of the first phase of the rollout, Cooperative Power is providing affordable electricity to NUW members across south-east Queensland. The average household is expected to save between $300-$700 off their yearly electricity bills. NUW member Pip is one of the first to switch over. Pip feels that “Australians are being let down by energy corporations. So come on the journey (with Cooperative Power) and be part of building a more sustainable future.”

Cooperative Power is structured as an enterprise cooperative, which means that its members are unions, community groups, NGOs, and other cooperatives. Cooperative Power services will be restricted to the rank-and-file members of such democratic associations. Currently the Cooperative has access to over 75,000 highly engaged members across its founding members.

Sick of waiting for Canberra? NUW members in QLD are now switching across to take the power back! #coopsau #ausunions pic.twitter.com/jfxiawx4TI