South Africa is facing a crisis of constantly rising unemployment and job losses that is throwing the majority into deepening and widespread poverty. The COVID-19 period has also seen widening inequality. Big companies have become wealthier at an unprecedented rate while working-class people have grown poorer.

Around 100,000 people have officially died from COVID-19 in South Africa, but the number of excess deaths (compared with previous years) was 250,000 at the end of 2021. Vaccine procurement and supplies have increased but there is still a low and uneven uptake of vaccines. The low availability of vaccines for countries on the African continent undermines global efforts to overcome the COVID-19 pandemic.

In South Africa, many companies have not been able to recover from the pandemic and have either closed down or retrenched workers, resulting in massive job losses. Millions of workers lost their jobs during the pandemic while others experienced wage freezes (such as those working in the public sector) and others had wages reduced by up to 50%. Those who still have jobs face the challenge of sharing salaries with families who lost jobs. Unions will face the challenges of how to push for higher salaries for their members in this fragile economy while at the same time trying to save jobs.

The cost of living for workers has risen, and disproportionally impacts the most marginalised workers and their families. Food costs are up 5.9% and transport costs are up 16.8%. The national energy supplier (ESKOM) increased prices by 15.63% in 2021. It has applied to the energy regulator to increase the electricity price by 20.5% this year.

Dominic Brown of the Alternative Information and Development Centre (AIDC) said more than half the country takes home less than 1,335 Rand (AUD $122) per month. “This explains why we have such high rates of hunger. There are more than 10 million people who go hungry to bed every week, of which three million are children.” The South African Federation of Trade Unions (SAFTU) is mobilising for a monthly basic income grant of 1,500 Rand (AUD $137). The current lowest estimate for a living wage supporting a household of four is around 7,000 rand (AUD $640) per month. 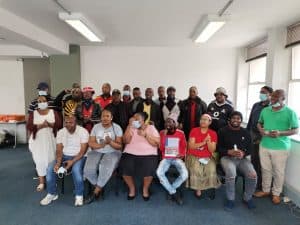 Union Aid Abroad – APHEDA has been contributing to Workers’ World Media Productions (WWMP) for many years, to enable their popular education around working-class issues: wages, gender violence, xenophobia, health, HIV, organising marginalised workers, education, housing, transport, and the environment. WWMP broadcasts weekly on 30 community radio stations in five languages and puts out electronic news, Elitsha. WWMP initiated the Peoples’ Media Consortium (PMC) with twelve NGOs partners and SAFTU, on an ambitious program of mass media development that integrates new technologies and social media to produce our own stories for TV, radio, and publications. This is being done using smartphones for mobile journalism and broadcasting via Internet-based Over the Top Television in partnership with Cape Town TV (CTV).

As part of the People’s Vaccine Campaign, WWMP’s local Labour Community Media Forums (LCMF) for workers and community activists to get together to organise for better living conditions, have done campaigning door to door and at shopping centres educating communities on the need to vaccinate. Covid-19 and Lockdown conditions shows were produced and broadcast nationally on CTV and BRICS TV.

Workers’ World has intensified its work in the rural parts of the country through the establishment of three LCMFs. Paarl, one of the areas where WWMP is assisting waste-pickers to organise, with help from Women in Informal Employment: Globalizing and Organizing and the South African Waste Pickers Association, have obtained a truck for transporting recycled waste. The Paarl group is run by women who were unemployed but now the municipality has provided them with an equipped recycling plant, safety equipment, and regular deliveries of recyclable waste.