The impacts of the climate crisis are not equally distributed and it is vulnerable communities across our region that bears the brunt. This exacerbates inequality and entrenches disadvantage. Read on to hear about the struggle against a mountain of coal, waged by an urban poor community in the Philippines that Union Aid Abroad – APHEDA’s partner, IOHSAD, has been working in over the last decade… 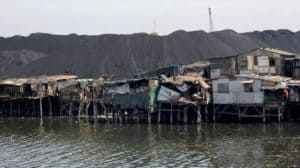 In late 2014 Rock Energy Corporation seized common farmland used by residents of the Happyland community and began storing enormous amounts of coal in a massive pile at the site.  Happyland is an urban poor community next to Manila harbour and is crammed with more than 25,000 residents. The people of Happyland (or Barangay 105, Tondo as it’s also known) face daily struggles including access to basic sanitation, precarious employment (such as garbage scavenging and garlic peeling), fear of extrajudicial killings from Duterte’s “war on drugs” and until recently child labour. Rock Energy’s thermal mountain of coal, dumped literally in the middle of the community, with coal leaning on walls of houses, has exacerbated the challenges the community faces.  For the last three years, the community has been covered in a fine layer of coal dust, coating everything in its path. This has exposed the community to dangerous levels of mercury, nickel, cadmium and arsenic. Many health and community organisations have reported numerous coal-related deaths, deteriorated neighbourhood vitality, and decimated livelihoods through harmed livestock and produce. This has been confirmed by media outlets in the country.

Recently, a community confirmed case of black lung claimed the life of six-year-old Kenneth. His mother, Jocelyn, explained the impact of the coal dust.

“You cannot stop the air here… it’s just so pierced, (coal dust) will always come in.”[2]

Despite the daily struggles Kenneth’s family faced in providing necessities, teachers at the local primary school remember the student’s diligence and excitement to be in the classroom. Jocelyn recalls the trauma of the morning her son passed away, “It was about 10 am and he told me it was hard to breathe. I ran to the hospital (with him), and no, he was dead on arrival at the hospital.”[3]

In response, the community has been organising and demanding action. Grassroot activist groups including Bayan, Gabriela, Kalikasan, IOHSAD and others have been working with the community to demand the mountain of coal be removed and Rock Energy cease all operations. The community has held regular rallies at the city hall, blockaded the coal pile (to violent opposition), facilitated health impact assessments, held community forums and harnessed national media attention.  This pressure has won a series of condemnations and orders from government authorities for Rock Energy to improve health practices.  Often this has resulted in the company halting operations for a few weeks, only to start again.  Earlier this year, however, the community had its biggest win. Authorities have forced the company to install much more substantial fences around the coal pile and use sprinkler systems to minimise dust.  While this appears a welcome stop-gap, the community is resolute to see the coal pile removed entirely.

“The pile of coal dust in that facility is mountain-like and, as much as Rock Energy tries to flatten it, it’s not possible because of the huge quantities,” said Ram a community spokesperson.

“If Rock Energy Corporation will not pull out, then we, the people of Tondo will do the eviction work for them!”[4]

APHEDA’s partner IOHSAD has been working with the community for nearly a decade.  The project responded to high instances of dangerous child labour, where parents would take their children to scavenge on nearby rubbish tip.  IOHSAD has built the community’s capacity to stand up for the rights of children.  It has constructed an early childhood education centre, which removes children from dangerous labour (while parents are still able to work) and prepares them for entry into primary school.  Additionally, a health clinic provides free medical and dental services to the community, including education on nutrition.  These projects have helped eliminate dangerous child labour and vastly increased participation in school.  IOHSAD has stood in solidarity with the community as its battles the mountain of coal, with many of the community meetings and events taking place after hours in the early childhood centre.

Coal-use is rapidly increasing in the Philippines and there are plans to construct more than 20 new power stations (many are second-hand “clunkers” being bought from china).  If built this will bring the countries coal fired generation capacity up to 20,000 GW.  Such growth is not compatible with the COP 21 Paris agreement and it will continue to have devastating impacts on community health, like in Happyland. Meanwhile, Philippines’ privatised energy system means Filipinos pay some of the highest costs for electricity in Asia.

Alongside the direct community health impacts, the Philippines is one of the countries most at risk to the impacts of dangerous global warming. This was shown when Typhoon Haiyan tore through the country in 2014, killing more than 15,000 people and ruining the livelihoods of hundreds-of-thousands.

Tom Reddington is APHEDA’s organiser for Climate justice, Energy Democracy and the Philippines.

[1] Happyland was originally “hapilan” (dumpsite) from the Visayan word “hapil” meaning “to throw” because the area used to be a dumpsite of victims of summary executions.