On the eve of an important World Trade Organisation (WTO) meeting on intellectual property this week, the Government has revealed that Australia will not co-sponsor a proposal to waive commercial monopolies on COVID19 vaccines, as Shadow Trade Minister Madeleine King MP and campaigners have urged.

The disclosure came through Senate Estimate proceedings on 28 October, in which Department of Foreign Affairs and Trade (DFAT) First Assistant Secretary James Baxter told Senators that “the Government has decided that, rather than attaching itself” to a specific proposal, “it’s going to focus its efforts… on encouraging the key players to find convergence” and to “encourage both [camps] to show flexibility with a view to ensuring that we can have a consensus outcome”, rather than co-sponsoring the waiver on vaccines monopolies.

The Government’s position has been described by advocates of global vaccine equity as an ‘each-way bet’, arguing that the Australia government must take stronger action to ensure low-income countries can produce and distribute COVID19 vaccines without risk of breaking global trade rules. Dr Patricia Ranald, Australian Fair Trade and Investment Network (AFTINET) Convenor, said: “Australia must use its influence to support the waiver for low-income countries where millions are dying while more infectious variants like Delta develop. Australia still has time to become a co-sponsor to the proposal.”

Dr Deborah Gleeson, Deputy Convener of the Political Economy of Health Special Interest Group of the Public Health Association of Australia (PHAA) said: “Globally, less than 4% of people in low-income countries have been fully vaccinated. This means that the World Health Organisation (WHO) goal of vaccinating at least 40% of the population in all countries by the end of 2021, and 70 % by mid-2022, remains implausible.”

Michele O’Neil, President of the ACTU, said: “The Morrison Government delayed and compromised Australia’s response to the pandemic and our vaccine rollout. It is now condemning vulnerable developing economies to the same fate, rather than taking common sense steps supported by the rest of the international community to keep people safe and prevent unnecessary harm.”

Michelle Higelin, Executive Director of ActionAid Australia, said: “Vaccine inequity is deepening poverty and gender inequality, and winding back decades of progress. We urge the Minister to co-sponsor the TRIPS waiver proposal to support the rapid production and distribution of vaccines across the world.”

Tim O’Connor, Campaigns Manager at Amnesty International Australia said: “Big pharma companies like Pfizer are set to gain more than $36 billion by the end of the year, but the Australian government continues to be a passive bystander at the World Trade Organisation, seemingly unaffected by the thousands of people without access to vaccines who are dying every day. It’s time for the Australian Government to sponsor the TRIPS waiver, bring an end to the vaccine monopoly and ensure equitable access around the world.”

Dr Sandie Cornish, Social Justice Officer at the Australian Catholic Bishops Conference Office for Justice, Ecology and Peace, said: “In the context of a pandemic, and of an international pharmaceutical market marked by oligopoly, governments have a moral responsibility to intervene to ensure just access to vaccines for all, with a fair return for companies. Rent-seeking behaviour in the face of a catastrophic global threat to human life is unconscionable.”

Kate Lee, Executive Officer of Union Aid Abroad-APHEDA, said: “It’s beyond belief at this time of the global COVID-19 crisis, with over 5 million dead already, that the world is being held to ransom by a few countries backing pharmaceutical companies making such mega-profits on the back of the public funding they received. History will and should judge this blatant greed as a crime against humanity. We demand real and equal access to COVID-19 vaccines and other related products technology, so the global south can ramp up their own production. Leadership can fix this. We join the call for Australia to co-sponsor the temporary waiver on patents for COVID vaccines at the World Trade Organisation”

The waiver on the Trade-Related Aspects of Intellectual Property (TRIPS) agreement was first proposed by India and South African more than one year ago, and has since gained the support of more than 100 WTO member states, with 64 countries co-sponsoring the proposal to temporarily waiver intellectual property rules that grant pharmaceutical companies a monopoly on COVID vaccine production.

Opponents of the waiver have made a counter–proposal which relies on existing rules for voluntary arrangements between pharmaceutical companies and governments to share intellectual property rights. But this will not work because manufacturers of the most effective mRNA vaccines have refused to make voluntary arrangements with low–income countries, preferring instead to sell limited quantities to high income countries. 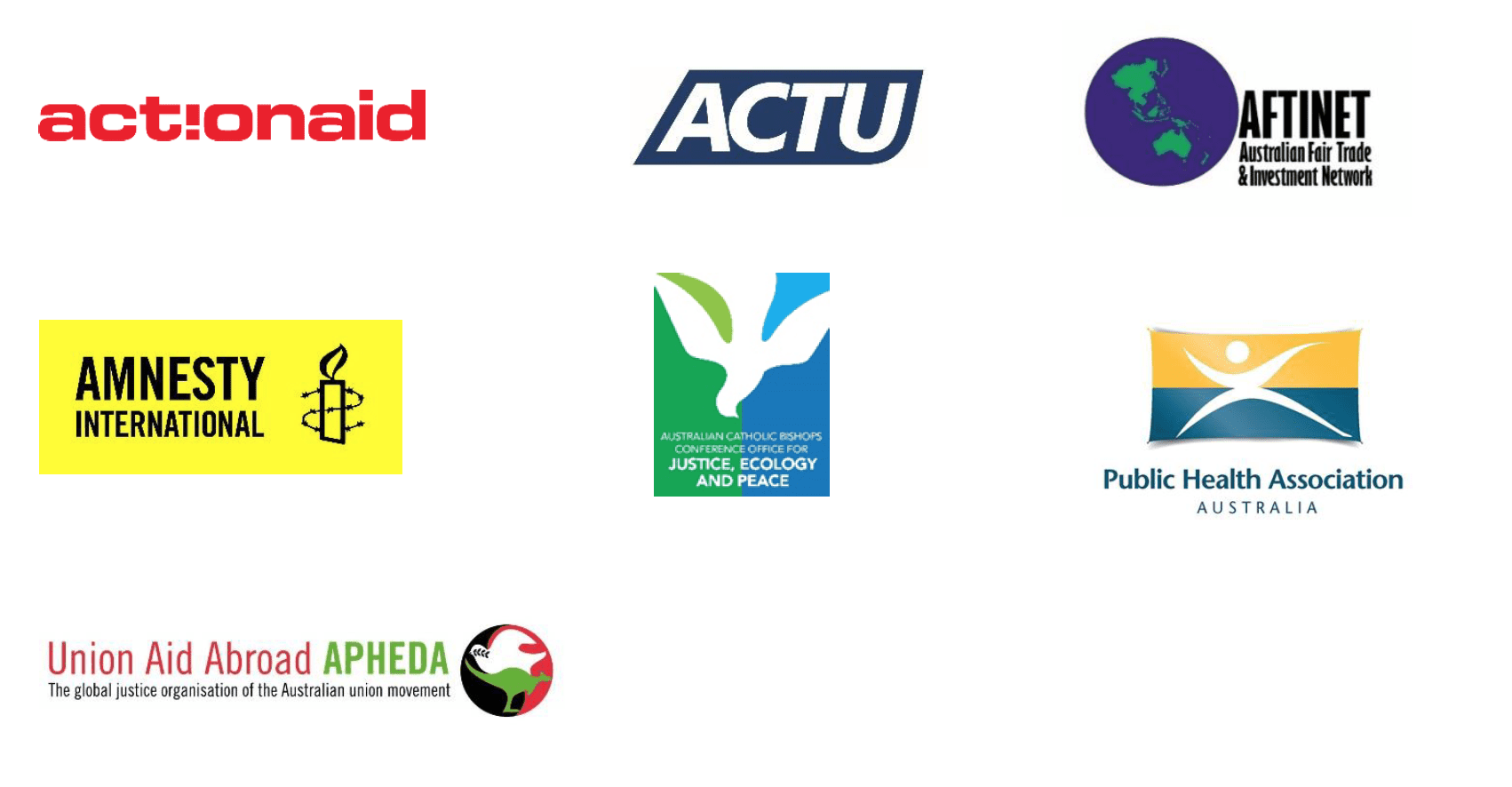