Vientiane Capital |1 March 2018 – A multi-sectoral workshop was organized by the Ministry of Health, supported by the World Health Organization and Union Aid Abroad -APHEDA to discuss the development of a National Action Plan to ban the use of chrysotile asbestos to eliminate asbestos-related diseases in the country. Participants included representatives from 9 Ministries, Lao Federation of Trade Unions, Cancer Centre of Mittaphap and Mahasot Hospitals and Health Science University.

Dr Juliet Fleischl, WHO Representative to Lao PDR said that “About 125 million people in the world are exposed to asbestos at the workplace. According to global estimates, at least 107 000 people die each year from asbestos-related diseases like mesothelioma, lung cancer, laryngeal cancer, ovarian cancer, asbestosis and pleural plaques, resulting from occupational, take-home and neighbourhood  exposures.”

Asbestos is one of the most known occupational carcinogens, causing about half of the deaths from occupational cancers. To date, more than 60 countries, including all member states of the European Union have banned the use of all forms of asbestos, including chrysotile. Other countries have introduced restrictions or no longer use it. However very concerningly, some countries have maintained or even increased their production or use of chrysotile asbestos in recent years. Increased usage has been most prominent in the Asia-Pacific region.

Mr Andreas Zurbrugg, Deputy Head of Mission at the Australian Embassy in Laos said that “Australia has a grim story related to asbestos that we think is important to share with the rest of the world. We are paying a heavy health and economic price due to our mining, manufacturing and intense use of chrysotile asbestos over the last century.  Up until the 1980s, Australia had one of the highest rates of asbestos use per capita in the world.  Now, Australia has one of the highest rate of asbestos-related disease in the world.”

Growing health concerns see the use of asbestos declining in many countries. However, chrysotile which is called white asbestos is still widely used in some countries, with approximately 90% being employed in asbestos building materials. The largest users are now those from developing and transition economies in Asia.

Chrysotile asbestos is being used widely in Laos in the building industry; the amount of imported asbestos has been increasing year to year and it has reached over 8000 tons in 2013. Alarmingly, the asbestos profile revealed that Lao PDR is the highest among Asia-Pacific countries, in terms of asbestos consumption per person.

The National Asbestos Profile recently developed by the Lao Government with support from the APHEDA, showed that there were 16 factories producing asbestos-containing roof tile. The national consumption of asbestos fibre increased almost 240% in just 3 years between 2010 and 2013.

Besides industrial use of asbestos-containing roof tiles in construction, it can also be found in exterior and interior products for factories and houses, some other household goods, insulation and heat-resistance materials and in friction products such as brake pads and gaskets.

WHO recommended that the most efficient way to eliminate asbestos-related diseases is to stop the use of all types of asbestos including chrysotile; there are solutions for replacing asbestos with safer substitutes and developing economic and technological mechanisms to move to safer options and create new job opportunities.

Dr Ken Takahashi, WHO consultant has been dedicating his efforts and vast experiences for many years in many countries in Asia to advocate to policy makers, showing firm evidence of his research and by sharing his experiences to ban asbestos and prevent asbestos-related diseases.  Dr Takahashi stressed that “Controlled use is not possible, we need to ban the use of chrysotile asbestos and take preventive measures to minimise exposure during the transition period. This will stop countries from repeating the same patterns of exposure and prevent future burden of asbestos-related diseases.” 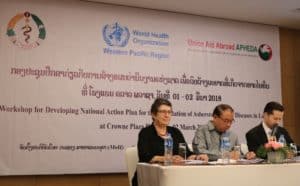