Ending gender based violence in Vietnam 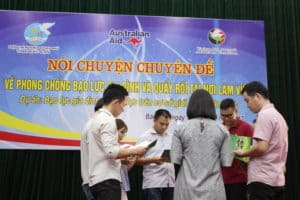 Bac Kan is a small province just north of Vietnam’s capital, Hanoi. It is renowned for its ethnic diversity and its natural beauty, in particular, Ba Be Lake and Ba Be National Park, both under consideration by UNESCO as world heritage sites.

Its economy is centred on mining, forestry, agriculture and a small but growing tourism industry. However, Bac Kan is also one of the poorest provinces in Vietnam, with more than 30,000 of its 80,000 thousand households living in poverty. With 80% of its population made up of a wide variety of ethnic minorities, Bac Kan has been prioritised under national development plans and, along with rapid economic growth, bringing rapid social change and increasing opportunities and risks for women.

In 2012, Bac Kan Women’s Union (BKWU), with support from Union Aid Abroad-APHEDA, began to mobilise local communities and local authorities to begin to tackle violence against women. Initially targeting rural communities, BKWU has grown in capacity and credibility as an advocate for women’s right to a life free from violence, extending their focus to targeting gender based violence in the workplace and being recognised nationally as a leading advocate in Northern Vietnam.

BKWU describes violence against women in the province as complex and diverse but a priority for them – with surveys reporting violence against women in all of its eight districts. This includes more than half of all women in the province experiencing some form of violence in the past twelve months and, of particular concern, one hundred per cent of women in one district reporting they had experienced some form of domestic violence. In 2017, there were 143 cases of violence reported to authorities, however, there are likely many more instances, as women are unable or unwilling to report violence against them.

Achievements over the past 15 months:

In the past year, BKWU have organized training for local authorities aimed at improving responses to complaints of violence by police, and held public awareness raising events, reaching an estimated 1800 people, to change gender norms and eliminate gender based violence. A hotline was established for women experiencing, or at risk of, violence to seek advice and support. To date 23 women have been helped and 282 households across Bac Kan have formed a network of safe houses for women escaping violence.

Looking forward over the next twelve months:

Over the next twelve months, BKWU will conduct a study of gender-based violence in the workplace and begin targeting workers with activities that challenge and change sexual harassment and gender based violence at work. Existing telephone hotlines and safe house networks will be promoted to women workers. BKWU now have capacity and resources to implement these important services themselves, with limited support from Union Aid Abroad.