Union Aid Abroad – APHEDA is a founding member of CoPower, a community-owned electricity retailer that aims to put the power back into ordinary people’s hands to enable positive environmental and social change.

Over the last year, CoPower’s solidarity fund has contributed nearly $5000 to just transition projects in Nepal and The Philippines.  In both these countries workers are on frontlines of global warming. Nepal is a Himalayan country where increased ice melt, storms, floods, and mudslides are wreaking havoc. The Philippines is an archipelago where more frequent and severe typhoons leave devastate communities.  In both countries the climate crisis is increasing the cost of living, reducing employment and lowering take home pay. 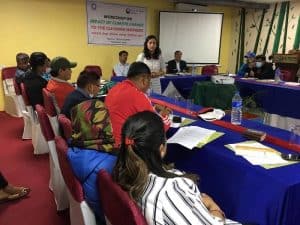 Class Nepal organised a workshop on the impact of climate change to the cleaning sector workers” in March this year.

In Nepal, CoPower’s solidarity has supported our labour research partner Class Nepal to draft a just transition organising manual. Class Nepal has worked across the union movement to consult with workers in sectors including waste, tourism, agriculture, electricity, transport, local government, and construction.  It has considered how climate change is impacting livelihoods, occupational health and safety, and economic changes including job losses.

In the Philippines, the solidarity fund has supported our partner the Centre for Trade Union and Human Rights (CTUHR) to create a climate justice training module. Following consultation with unions, women, environmental and church groups, CTUHR piloted the training module with agriculture workers in Northern Luzon.  The participating workers were from a sugar cane plantation that supplied the domestic bio-ethanol market. A range of complex challenges were identified including union-busting and poverty wages at the plantation, as well as the impacts of a recent typhoon which resulted in widespread flooding of the workers’ homes, including market gardens a key source of food for families. The workers also identified the lack of engagement and notification local authorities had provided when they opened the dam which resulted in the large-scale flooding of their community.

This year CoPower customer members have voted to allocate $100,000 to good works through the solidarity fund. Union Aid Abroad – APHEDA’s customer members have been active in the participatory budgeting process and ensured that Global Solidarity was voted for as a key thematic pillar, with $8,400 of funding being allocated to it. CoPower is currently calling for project ideas for each thematic area, which customer members will then vote on in June/July to finalise where the funds are allocated.

Union Aid Aboard – APHEDA will be submitting a proposal to continue to support CTUHR and CLASS Nepal on their important work organizing frontline workers. In the Philippines, this will allow CTUHR to continue to roll out its climate justice worker module and organise informal women workers and agricultural workers. This includes training 20 workplace/community leaders and organising 150 workers. In Nepal, CLASS Nepal hopes to finalise its training module and pilot in strategic industries such as the waste sector, where the commercial capture of biogas at Kathmandu landfill, is threatening workers’ livelihoods. This will strengthen the capacity of 30 union leaders to organise 150 workers.

Please keep an eye out on the CoPower website for the details of the project vote.

Consider switching your household’s electricity to CoPower and voting to support international solidarity.