The Cambodian Food and Service Workers’ Federation (CFSWF) is an independent federation of food and service industry unions. CFSWF organises workers and empowers them to improve working conditions and wages for some of the most vulnerable workers in Cambodia. Union Aid Abroad – APHEDA has collaborated with CFSWF since 2011, and successfully advocated for changes to the labour law to recognise and protect entertainment workers for the first time in Cambodia. Since then, APHEDA has supported CFSWF’s efforts to organise workers to claim these rights.

In Cambodia, the global Coronavirus pandemic has hit hard. The Ministry of Health closed entertainment venues, nightclubs and cinemas nationwide in March 2020. This has pushed tens of thousands of entertainment workers, who are among Cambodia’s most vulnerable workers, into unemployment overnight. Unable to earn a living and falling through the cracks of the government’s COVID emergency payment programs, CFSWF members are struggling to put food on the table.

During this time Union Aid Abroad – APHEDA has supported CFSWF to broadcast television and radio talkback programs to raise awareness about the struggle of food and service workers, and to mobilise workers to demand access to the Government-funded wage relief scheme. The scheme is currently only available for garment and tourism industries and families currently listed as poor and vulnerable. 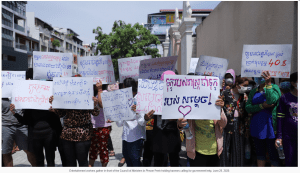 In a recent media interview, CFSWF president Ou Tepphallin said that “the government should have included women in the entertainment sector as part of its assistance programs, noting that Prime Minister Hun Sen had vowed ‘not to leave anyone behind’ during the outbreak.” RFA, 26 June 2020

To date, efforts to extend government financial support to unemployed entertainment workers has been denied and most have been unable to find new employment. Union Aid Abroad APHEDA will stand by CFSWF and struggling workers, supporting awareness raising, organising and health and safety through the global pandemic.

The project will support unions to explore gender and power within unions, strengthen representation of women workers issues through the union movement, and engage decision makers to advance women workers rights in Cambodian policy and law.