Moving to more equality for people with disabilities in Vietnam 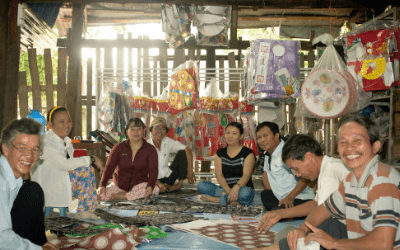 People with Disability in Vietnam – the facts

The number of people living with a disability in Vietnam is staggering. According to the Vietnam Disability Association, there are 5,203,180 people with disabilities (about 5.8% of the population). Cognitive, physical and visual disabilities make up 25.3, 22.4 and 15.7 percent respectively (https://www.globaldisabilityrightsnow.org/infographics/disability-vietnam).

The Decent Work and Community Empowerment program takes off

In 2012, Union Aid Abroad – APHEDA in partnership with the Vietnam Women’s Union, the Vietnam Disability Organisation and Department of Labour, Invalids and Social Affairs started supporting a program called “Decent Work and Community Empowerment for People with Disability”. After encouraging results, APHEDA and its Vietnamese partners together with Irish Aid started the second phase of the project (2015 – 2017). This phase built on the work from the first phase and scaled up the role and function of the Vietnam Federation of Disability (VFD), working with its members from the commune to the provincial level.

During the second phase, APHEDA expanded its partnership base and began working with the Quang Nam Department of Labor, Invalids and Social Affairs (DOLISA), Hai Duong and Quang Nam Disabled Peoples’ Organizations (DPOs), the VFD and the March 8 Centre in Hai Duong province. The VFD was assisted to develop and implement a five-year strategic plan. The project also expanded and strengthened the people with disabilities networks. Importantly, it also reduced unemployment and decreased isolation amongst 250 people with disabilities and their families, enhancing their social integration.

The VFD has developed an effective 5-year strategic plan and implemented the plan in 11 provinces. The role of the VFD has been recognised by the Government of Vietnam at both the national and provincial level and it was officially requested to prepare a report which was sent to the United Nations Human Rights Committee.

A representative model worthy of replication

The established DPOs are becoming models for replication in other places. The DPOs in Quang Nam and Hai Duong are receiving delegations from other provinces/districts who are coming to view how they operate.

With the technical and financial support provided, the VFD and established DPOs have successfully supported the creation of 3 new district DPOs and 20 new commune level DPOs in Hai Duong and Quang Nam provinces. There is also one provincial DPO in Dong Nai and five district DPOs in Hai Duong provinces. Many commune DPOs are in the process of finalising administrative procedures for their formation. These results speak to the achievements of networking, advocacy, and organisational development of people with disabilities.

Income levels are still below what would be considered a living wage for people to live independently from family, but it represents an important step in the struggle for recognition and equality at work for people with disabilities.

A bonus side to the project: love

Six participants have met their life partners through the training program. Not only have they gained a new vocational skill and employment, but they have also found love. They are all looking forward to a long life together!

Union Aid Abroad-APHEDA continues to provide advisory support and advocacy for the representation group structure. The local Government at the provincial, district and commune levels are supporting the establishment and operations of the DPOs, including the financial support of 15 to 20 million Dong each per year (Aud$900 -1,200) in the 2 provinces where APHEDA was previously supporting the program.

As the project has put in place the mechanism for organising and building the capacity of its advocacy, the effectiveness of DPOs in obtaining funding will increase giving the project sustainability into the future. Looking in the longer term, the next steps are to improve the occupational health and safety conditions at workplaces.