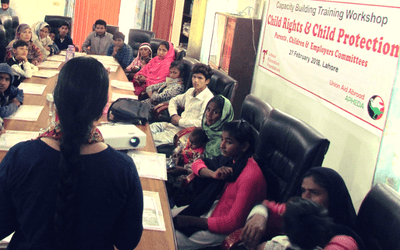 The Labour Education Foundation (LEF) in Pakistan helps build the labour movement by working from the ground up, working in poor communities around pollution, violence, gender equality, illiteracy and child labour, and then building organisations of workers in both formal and informal sectors.

Child labour is a pressing problem in Pakistan, and Union Aid Abroad has been partnering with LEF on a project in Khaliq Nagar, near Lahore. This is a poor community of 18,000 residents. The objective of this project is to organize parents and children against child labour, provide basic education options and community-based transition from child labour to decent work. LEF helps start Labour Community Organisations (LCOs) with the support of Swedish Teachers Union. LEF organized a Youth, Health and Education Care (YHEC) in Khaliq Nagar started an education centre for girls and boys.

In October 2017 LEF workers met with 236 child workers who never went to or dropped out of school, identifying 24 shops, factories, brick kilns, and houses in Khaliq Nagar. Some work areas have poor lighting, and most have insufficient fans to cool hot work environments. Hygiene, work safety and clean water are also problems, exacerbating the terrible impacts of labour on children’s health.

In November the YHEC enrolled 60 child labourers were enrolled in the Education Center in Khaliq Nagar. There are morning and afternoon shifts with children learning basic Urdu and English literacy, names of colours and animals, and counting up to 100.

Three local committees have been formed of parents, employers and children, each with ten members, with the objective that “the rights of child labourers are recognized and better protected by state and non-state actors as well as community members through awareness and training sessions.” The committees help in enrolling child labourers in education, mainstreaming children into formal schooling, ensuring occupational health and safety at work places, taking actions to end violence on child labourers and eradicate child labour. Education sessions on Child Rights and Child Protection, Labour Laws and Workers Rights”, Child Labour, Gender Equality and Occupational Safety and Health were conducted with parents, employers and children, with 230 attendees. LEF also introduced the Child Protection Policy with committees of parents, employers and children. The project is ensuring child labourers gain admission in formal government schools, and that the children confident not only in studies but also in extracurricular activities.