Food sovereignty and security is an ongoing challenge in Timor-Leste. About 80% of the population are small-scale farmers, planting and harvesting what they need to survive. However, for many, farming does not provide a reliable income, and because agricultural production is low, food supplies have not kept pace with population growth, requiring Timor-Leste to be a net food importer. Border closures brought on by the COVID-19 pandemic have only served to highlight these production gaps, leaving many families unsure of where their next meal will come from.

Since 2016, Union Aid Abroad – APHEDA has worked in partnership with three local Timorese organisations – the Instituto Edukasaun Popular (IEP), Kdadalak Sulimutuk Institute (KSI) and Uniaun Agrikultor Ermera (UNAER) – who have teamed up to establish and strengthen farmers’ organisations across the country to help overcome this issue and encourage sustainable development. 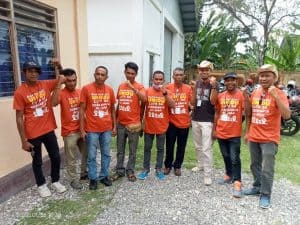 In January, Timor’s fourth farmer’s union, the Manufahi Municipality Farmers Union (UAMM) held its inaugural congress. From 25-27 January, 157 delegates – representing agricultural, fishery and livestock workers – gathered under the banner “To’os na’in United Fight ba Soberania Aihan” (Farmers United in The Fight for Food Sovereignty), voted to consolidate their power and work together to develop the agricultural sector. They agreed that their platform should focus on championing farmers’ rights and assisting them to increase production by coordinating access to land and fair markets. This followed many months of strategic organising throughout Manufahi municipality – stretching from Timor’s central mountains to the southern coast – where the local climate and terrain are well suited to the cultivation of tropical fruits and vegetables, as well as Timor-Leste’s famous organically grown coffee.

The UAMM also became the first union in Timor Leste to elect a woman, Delfia Pereira, as its president. This is not only a major milestone for women’s rights and the Timorese union movement, but a testament to our partner organisation’s ongoing commitment to increase women’s active participation and leadership of all activities.

Timorese resistance veteran and  member of the national committee for land reform Madalena Bidau Soares, popularly known by her guerilla name “Mother Kasian”, made the direct connection between the farmer’s struggles and her country’s proud history of national liberation. She said at the congress: “In the past we fought for the country, not to sell land, but also to use land to produce, so that the country can develop its domestic economy, especially to improve the family economy.

“Young people must organize one another… to live independently and contribute to the family and the nation.”

The UAMM was also praised by government officials at both municipal and national level, in their efforts to contribute to Timor-Leste’s ongoing development. 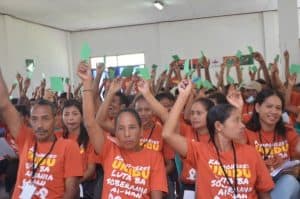 Administrator of Manufahi Municipality, Arantes Isaac Sarmento said: “The Congress was very important, because during the fight for the liberation of the people, the state and the government alone cannot do everything, but it is necessary for everyone to support and contribute to collaborate in the liberation of the people.” He called on all farmers to unionise to develop the agriculture sector. “One of the fundamental principles for freeing the people is the identification of potential areas for agricultural activity, not [just] the use of housing,” he continued.

This sentiment was shared by the Prime Minister’s First Secretary, Francisco Mario de Vasconcelos, who asked the farmers to continue organising their land and rice fields, so that they can increase production in the country. “We must eat what we plant, so that we cannot be dependent on production abroad,” he said.

Thanks to these efforts, an increasing number of Timorese farmers now have means to facilitate access to capital, credit and influence, but there is still some way to go.

The four farmer’s unions have set up a national committee to pursue national land reform – a key issue for farmers across the country – with the goal of establishing a national farmers organisation by June 2025. Before that happens, they seek to inaugurate three more agricultural unions in in Bobanaro, Ainaro, and Viqueque municipalities, building deep relationships across a broad network of Timorese society to ensure commitment and a unity of vision. By empowering strong, grassroots social movements, rural communities can win their struggles around food sovereignty and security, environmental sustainability and worker’s rights, and help herald a new era for Timor-Leste’s development.