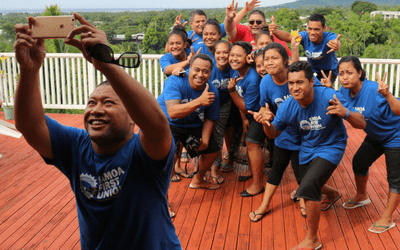 The governments of the US, Japan, Norway, Sweden, Denmark, the Netherlands and Finland all see fit to fund the building of organised labour in developing countries. They do this via their overseas aid and development budgets, working cooperatively with their local trade union movements to do so. These programs continue regardless of political party in office and have done so for decades. No Australian government has ever done this, instead preventing any aid funding from being spent in ways that might lead to ‘industrial action’. In Australia, trade union building work undertaken by Union Aid Abroad-APHEDA is funded by Australian unions, individual members who donate monthly and other international trade union organisations.

But it doesn’t have to be like this. Union density and prevalence of collective agreements are at much lower levels across most of Asia compared to Europe and Australia. Australian governments can commit to supporting the development of trade unions in developing countries.

2. Inequality is rising in the Asia-Pacific region

In May, the UN released a new report on inequality in Asia[1]. The message is clear: income and wealth inequalities are on the increase despite the massive economic transformations and subsequent growth in Asia over the last 20 years. Income inequalities grew in about 40% of countries in the Asia-Pacific region. The global measure for inequality, known as the Gini coefficient, grew by 5 percentage points in the Asia-Pacific region over the last 20 years (showing an increase in inequality), a trend counter to other regions in the world. We know that indicators of inequality are strongly linked to development – and that with low levels of development come poor access to core opportunities for education, health care, finance, clean energy and water and sanitation. Afghanistan, Bangladesh, Cambodia, Lao People’s Democratic Republic, Myanmar, Timor-Leste and Vanuatu are all listed as countries that are particularly unequal when it comes to these core opportunities.

In 2015, the International Monetary Fund quietly issued a paper by two of its research team titled Power from the People[2]. It said what unionists already knew, collective action through unions equalises our world in two ways, by organising for wage increases through workplace bargaining, and by campaigning for gains to the social wage such as for social security, health care access, equality at work, for example.

The facts are undeniable. Conservative economic orthodoxy is forced to recognise that collective action of unionists at all levels, positively impacts for a more equal society – from workplace to national levels.

Despite all that we now know about global inequality and poverty and the individual and societal harm caused by it, corporate reach and power continues to escalate. Capital continues to find new ways to maximise profit and in doing so worker’s wages and safety is continually compromised in the pursuit of profit.

The International Labour Organisation has predicted that 56% of workers in south Asia’s key manufacturing hubs in Thailand, Cambodia, Indonesia, the Philippines and Vietnam could lose their jobs over the next two decades due to robot manufacturing. Now a new report released this month by supply-chain analyst firm Verisk Maplecroft shows a terrifying picture of future work under automation with an escalation in slavery and labour abuses in brand supply chains. As workers are displaced through automation, they must “compete for a rapidly diminishing supply of low-paid work in potentially exploitative conditions. This will lead to increased risks of slavery and trafficking across a region already vulnerable to these kind of abuses”[3].

With no end to modern slavery, we need strong unions in both developed and developing countries to demand regulation against exploitation.

The results of government spending to build collective power of workers in poor countries speaks for itself. Here are two examples led by the international trade union movement:

a/ Campaign to end the kafala system in Qatar which exploits migrant workers leading to abuse and forced labour. This campaign had funding contributions not just from unions but from governments via their overseas aid budgets.

b/ Campaign for health and safety standards in Bangladesh following the Rana Plaza disaster. Coordinated union campaigning together with the financial resources to hold major brands to account, has helped workers to organise in Bangladesh with the weight of international solidarity behind them.