Five things to know about public ownership of electricity 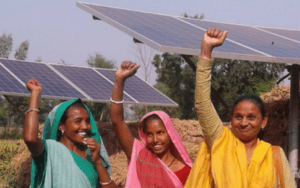 1. Privatisation has failed in Australia

The recent People’s Inquiry Into Privatisation highlighted the great failure of privatisation in the electricity sector in Australia. This includes; skyrocketing costs and increased disconnections for households, huge job and training losses for the workforce, reduced maintenance and increased public safety risk, reduced research and development, off-shoring of profits and overall loss of accountability, transparency and control. Read more www.peoplesinquiry.org.au/report

2. QLD leads the way on public ownership of electricity

Defending public ownership of electricity has been a key issue in recent years at the ballot box in Queensland and Western Australian elections. The Queensland Labour government has committed to building 1 GW of publicly owned clean energy generation and defending public ownership of electricity assets.[1]  (Thanks in large part to a great LEAN campaign).

3. Affordable energy for all in the UK (if Corbyn gets in)

Jeremy Corbyn’s opposition Labour party in the UK has a platform of re-nationalising the privatised electricity system and transitioning to clean and affordable energy for all.  If successful at next election this could see Margaret Thatcher’s radical neo-liberal project come full circle![1]

4. The Philippines forced to privatise electricity at great cost to its people

Many countries in our region have been forced to implement neo-liberal electricity “reform” to access much needed international aid and loans. In the Philippines, this has created an oligarchical privatised market with one of the highest prices for electricity in Asia and over 11 million people with no access at all!  National union SENTRO is fighting back and working with its membership in the publicly-owned electricity cooperatives to defend public ownership, improve cost for households and embrace clean energy generation.  (Stay tuned for an update in the coming months from SENTRO in this project co-funded by Union Aid Abroad).

In Nepal, despite neo-liberal pressure for Private-Public partnership, the National Electricity Authority is using a Public-Public model to own the new 456W Upper Tamakoshi Hydroelectric Project. When completed it will be the largest hydropower project in the country.  This innovative model sees public ownership achieved through cross-government entities partnering along with staff pension fund investment.[1]

Read the latest on the privatisation debate from Australian professor, John Quiggin: https://www.theguardian.com/commentisfree/2018/jan/29/privatisation-is-deeply-unpopular-with-voters-heres-how-to-end-it