Five things about rape and conflict 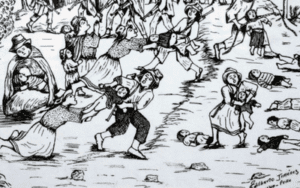 1. War and conflict is gendered: women’s bodies are a battleground

While no one is spared from the trauma and violence of conflict, gender-based discrimination and violence are rooted in all aspects of conflict. In many conflicts, men and boys are more likely killed or forced into fighting while women and girls are raped or forced to serve as sex slaves. In some cases, women are targeted as a way of humiliating men. This is true of the US war against Vietnam. US soldiers were also allegedly given the status of a “double veteran” if they sexually assaulted women before they murdered them (Lives Blown Apart). In Darfur, human rights violations took place systematically – men were executed, and women raped, often publicly. Women and girls were forced into sexual slavery and some had their arms and legs broken to stop them from escaping[1].

Yet the voices of women are largely ignored and left out of conflict resolution, peacemaking and reconstruction in the aftermath of conflict. In most cases, any attempts to seek justice is difficult, if not impossible, as perpetrators are often protected and are able to hide behind a culture of impunity. This leaves women feeling doubly victimised and reluctant to speak out and report sexual violence.

Since August 2017, horrific accounts of sexual violence against Myanmar’s Rohingya women have been clearly documented by health workers and humanitarian organisations in refugee camps in Bangladesh. Each case describes the perpetrators as wearing uniforms indicating that almost all of them were military personnel.

While the situation facing Rohingya women has received recent media attention, the use of rape as a weapon of war in Myanmar is not new. Union Aid Abroad APHEDA’s long-time partner organisation, Karen Women’s Organisation (KWO), has been documenting prolific sexual violence in eastern Myanmar for many years (read ‘Shattering Silences’) and has more recently documented cases of Sexual and Gender Based Violence (SGBV) taking place in refugee camps along the Thai-Myanmar border (read ‘Salt in the Wound’). In 2002, the Shan Women’s Action Network (SWAN) published ‘License to Rape’ which details hundreds of cases of rape and sexual violence by Myanmar army troops in Shan State. This was followed by similar reports by women’s groups in Karen, Kachin, Mon, and Chin states, as well as national reports by the Women’s League of Burma, paving the way for UN agencies and experts to address this widespread and systematic problem. Though the violence and impunity documented in these reports are similar, the recent violations targeting Rohingya women appear to be more organised, intensive, and brutal. However, the pattern of denying acts of sexual violence and further victimisation of survivors who speak out has been consistent across the country. The climate of sexual violence has also made women and girls more vulnerable to trafficking and other forms of exploitation. Rohingya woman and human rights activist, WaiWai Nu will speak out on rape as a weapon of war in Myanmar at the Sydney Opera House as part of All About Women 2018.

During WWII, between 20,000 and 410,000 women were forced into sexual servitude by Imperial Japan. At the end of the war, over 90% had died from sexually transmitted infections, complications from violent treatment or through suicide. Most women were from South Korea however 20,000-80,000 women were raped during the six-week-long massacre that destroyed Nanjing, China, in 1937. In 2005, 80-year-old survivor, Chen Jinyu reported that she was raped every day when she was a 16-year-old serving as a comfort woman for the Japanese military. Japan’s attempts at making an official apology have fallen short and survivors still await restitution.It has been said that a recent attempt at an apology was motivated by the need to ease ongoing tensions between South Korea and Japan and was heavily encouraged by the United States (who enabled the “comfort stations” to continue in Japan well past the end of the war as thousands of women were forced to have sex with American men until MacArthur finally shut down the system in 1946*). The apology also failed to mention “comfort women” from China, the Philippines, Timor Leste and other Asian countries.

The legacy of the “comfort women” is not going away anytime soon. Last year, the Korean community in Sydney erected a statue at a church in Sydney’s Inner West to remember and honour the women. The statue prompted the launch of an 18c racial discrimination case by Japanese Australians who took offence at the statue. More than 85 years on, the “comfort women” remain the thorniest issue in Japan-South Korean relations.

During the 1980s and 1990s, rape was used as a weapon of war during one of the most violent internal armed conflicts in Peru’s history. Witnesses report public mass rape and soldiers have said that they were forced to commit acts of violence as part of their training.A Truth and Reconciliation Commission was set up and tasked with investigating human rights abuses between the Shining Path (Sendero Luminoso) and government forces. It was found that the majority of women were younger than 30, lived in rural areas, spoke an indigenous language as their first language and had little formal education. In over 17,000 testimonies, the Commission came to the view that the conflict ‘emphasized and strengthened a gender system that was characterized by inequality, hierarchy and discrimination…. Women were ordered by both armed opposition groups and the security forces to cook for them, tend the sick and provide accommodation’. Another form of sexual violence that took place was the capture of women and subsequent ‘gifting’ of women as war booty for both foot soldiers and civil allies of the army who ‘could choose a wife from among the captives’*.

5. Rape in conflict is more common than you think

Sexual violence during conflict and rape as a strategic weapon of war is more common than you think. And it is still taking place. Rape as a weapon of war is ongoing in Myanmar and was widespread in South Sudan, Peru, Guatemala and in Bangladesh in 1971 during the struggle for independence from Pakistan. Wholescale sexual abuse of women and young girls in Syria and Iraq has been widely reported in the Yezidi community. Conflicts in Rwanda, Bosnia and the Democratic Republic of Congo have seen wide use of sexual violence with post-conflict instability in eastern Congo earning the region the title of “rape capital of the world”.  Even in refugee camps, rape is prolific. Alarmingly high rates of rape were recorded at Somali refugee camps in Kenya in 1993 while up to 16 women a day were reportedly raped in western Darfur when they left the camp to collect water*.