Five things you should know about the Global Compact for Migration 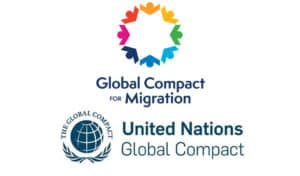 Migration is as old as humans, however, wars, mass displacement of people, land grabbing and environmental impacts, disease, poverty and starvation are all causes for people to move to seek safety and stability. Right now nation states as part of the United Nations are meeting and negotiating what will be included in the Global Compact for Migration.

1. What is a Global Compact for Migration (GCM)?

A compact is an agreement. The GCM will be the first intergovernmental agreement which seeks to cover the whole range of issues that relate and impact on migration and migrants. There are a number of conventions from both the UN and the International Labour Organisation but many countries have not ratified these conventions.

The compact will not address refugees or mixed migration. It is concerned only with “safe, regular and orderly” migration.

Are you interested in reading more? Check out: http://www.ilo.org/global/topics/decent-work/lang–en/index.htm

2. Why argue for better work rights for migrants?

When exploitation occurs it starts with those with least power. The safety net or minimum conditions fall as the employers undermine conditions and those without power are unable to gain access to enforcement. This is because they are often not organised, not informed of rights and have been convinced that as visa holders or migrant workers they are not worth the legal pay rate. Local workers often believe that migrant workers are a threat to their jobs rather than blaming the employment practices which are determined by employers. This is convenient for the employers as it creates a divided workplace and is therefore easier to control.

We need universal laws for all workers, and we need laws to be enforced when employers fail to comply. This will prevent exploitation and the downgrading of conditions.

3. What are the kinds of provisions that will be included in the compact?

The compact will not deal with refugees or with irregular migrants – i.e. those people who are refugees and are seeking a safe place to settle permanently and in safety.

It will provide:
• A comprehensive global intergovernmental agreement which intends to address all aspects of international migration, humanitarian, developmental, human rights and other matters which impact on migrants
• Global governance for the coordination of matters of international migration
• Provide a framework so that nation states cooperate on matters affecting migration and human mobility
• Establish reporting responsibilities for nation states to be guided by in relation to
• 2030 Agenda for Sustainable Development
• Addis Ababa Action Agenda
• Declaration of the 2013 High-Level Dialogue on International Migration and Development

4. Why do migrants need a special arrangement?

There are a range of unjust practices that impact on migrants
In some nations, local laws prevent migrants from being able to change employers mean they are vulnerable to exploitation or indeed slavery like terms. Other examples include the surrender of passports to employers so migrant workers are not able to return home or take holidays.

There are many myths around migration. Migrants are not recognised for the economic contribution by filling labour force shortfalls, particularly in jobs others do not want to take. They are seen as a drain on the economy rather than recognised for making a positive economic contribution such as paying tax or by running businesses and employing others. The transfer of money in the form of remittances back to countries of origin provide funding for families and communities, and for developing economies means a large flow of capital.

One of the calls is for improvements to financial arrangements so that migrants are not requested to pay exorbitant fees to transfer money.

Being a migrant is often accompanied by negative experiences. Unscrupulous businesses are a problem when they fail to comply with labour standards and this can lead to the undermining of standards for others. Racism and bias subjects migrants to lesser standards and to discriminate or make them feel unsafe and vulnerable. Often a national government will not act to enforce laws because of the influence of those who use these tactics against migrants.

Migrants are often forced to seek work in other countries because they need to earn money to support their families. Poor people are vulnerable to loan sharks who lend money which leads to long term debt. If not paid back it can cause violent attacks and threats against family members back home. Some migrant workers are forced to live in poor circumstances in other countries because of the pressure to send money home. They live in a constant financial crisis.

5. Why did the United States leave the process?

In December 2017 then Secretary of State Rex Tillerson announced President Trump had decided he would withdraw from the negotiations for the Global Compact because he believed it interfered with US sovereignty. This decision was taken prior to the commencement of the negotiations and as such it appears the US opposes a Global Agreement regardless of the outcomes. It is unclear which aspects of the intended aims were not commonly shared by the US President and other decision makers. As a receiving country rather than a country of origin, the self-exclusion of the US may have an impact on the human rights and access to other rights of migrants. It may also result in any country which is asked to provide migrant workers being required to negotiate direct with the US. This is potentially quite a costly process for a small and poor country.