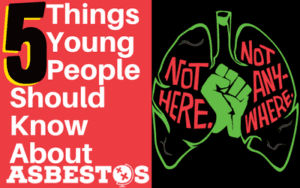 The theme for Workers’ Memorial Day this year is ‘Building safe and healthy workplaces for future generations’.  Australia banned asbestos in 2003, which means many young workers are unaware of the dangers of the deadly substance. Not only are asbestos products still being used overseas but thousands of asbestos products are illegally imported into Australia every year.  Send this article to a young worker you know and let them know why we need everyone on board to end asbestos here and around the world.

Asbestos is still mined and used around the world

Only 63 countries have banned asbestos and around 2 million tonnes of asbestos are mined every year. 77% of all global asbestos use is in Asia and Laos has the highest per capita use. Due to opposition from industry lobbies and asbestos mining countries, some forms of asbestos still are not banned. But there is progress too – in January this year the Vietnamese Prime Minister announced that the country would ban asbestos by 2023. Read more about the Vietnam announcement

Deaths from Asbestos related diseases in Australia are projected to increase

Each year more than 4000 people in Australia die from Asbestos Related Diseases (ARD) including mesothelioma, asbestosis and lung cancer. ARDs can take decades to develop and some medical professionals project that they may not peak til 2021. The Australian Institute of Health and Welfare says that the number of mesothelioma cases is expected to reach 18,000.

Australians are still being exposed to asbestos in their workplaces

Our neighbours are campaigning for asbestos free workplaces and communities

Activists and unionists across Asia have been battling misinformation from the asbestos industry to win safe workplaces and communities. In March this year the International Trade Union Confederation (ITUC) held an Asbestos Conference in Jakarta that brought together trade unionists from around the Asia Pacific region. They resolved to campaign for the realisation of “an Asbestos free World” for the health and safety of all workers, their families and their communities. Activists and unionists in Indonesia, Vietnam, Laos and Cambodia are campaigning to end asbestos in their countries and they’re asking for our support and solidarity. Read more about APHEDA’s ‘Asbestos. Not here. Not anywhere.’ campaign

As long as it’s being used anywhere, it’s here. And everywhere!

As long as asbestos is being used around the world and in our region, there will continue to be illegal imports that end up in our communities and workplaces. You can help support the campaign to end asbestos. Get involved