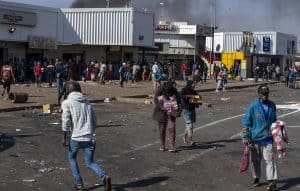 Global food prices on the rise

The UN Food and Agriculture Organisation said that in May the global prices of key foods had increased 40% as compared to twelve months ago. This is because of three interacting crises: in the neoliberal global economy, climate and the pandemic.

In 2007-8 a similar collapse of the world food system, just before the Global Financial Crisis, triggered uprisings in more than 30 countries. Now, extreme weather events, heat and water shortages are impacting on various food crops in many parts of the world, with price rises exacerbated by the dynamics of the political economy of the global food trade.

Last year saw the mass movement of farmers in India against the Modi government. In July this year, rioting in South Africa, particularly around Durban and Johannesburg, shows the desperation of millions of people. The imprisonment of former president Zuma, accused of corruption, led some of the political elite to launch demonstrations against the government. This created an opportunity for the looting and destruction of supermarkets and other shops, in which 79 people in Gauteng province and 258 in KwaZulu-Natal (KZN) were killed. Migrant and refugee street traders were particularly vulnerable.

“These riots are about hunger. They’re acts of desperation fuelled by the severe damage the lockdown measures have caused. A young man told a television news crew: ‘I’m really not concerned about Zuma. He is a corrupt old man that deserves to be in jail. I’m taking things from the shop for my mum.” (from an article by Ben Morken on the Workers’ World Media Productions website, www.wwmp.org.za).

The Congress of South African Trade Unions saw this anarchy as destroying livelihoods and making the situation worse for working people and the masses of urban and rural poor. The movement of the shack dwellers, Abahlali baseMjondolo asked “What will happen to people’s jobs now that factories and other places of work are being burnt? That is not a revolution. It is destruction that will leave the poor poorer.”

The deadly impact of COVID on South Africa

Officially South Africa has had around 70,000 deaths from Coronavirus, but many reports say the actual number is much higher. Even in the first months of the pandemic in 2020, some estimates put job losses at 2.8 million. Out of a working-age population of 36 million people, only 15 million South Africans have any paid work. COVID is particularly dangerous in South Africa, with widespread tuberculosis, and around 8 million people living with HIV, (20% of those 15-49 years), 240,000 new infections and over 70,000 deaths per year.

At the same time in July 2021, across the border of KZN, in eSwatini (formerly Swaziland), also heavily impacted by the COVID pandemic, 27 people were killed by police supressing an uprising against the King, demanding democracy, food, land and jobs.

In South Africa the organisations of workers and urban and rural poor are demanding acceleration of COVID vaccinations, immediate increase in social security payments to all who are in need, lower prices for food, emergency food distribution directly to the poor, job creation, an end to evictions, land for housing and community farming cooperatives supported with irrigation, seeds, fertilisers, training and equipment.

The urgency of a food sovereignty approach

Denia Jansen, from the Mawubuye Land Rights Movement in the Cape Winelands spoke on behalf of the South African Rural Women’s Assembly, a movement of poor women in the villages, informal settlements, and rural towns across the country — small-scale producers, small-scale farmers, farm workers, fishers and informal traders. “We live from hand to mouth, dependent on social welfare. Child support grants, old-age pensions, disability grants, etc, still leave millions of people aged between 18 and 60, without any form of income to even buy food. As unemployment and inequality in the country deepens, we have had to stretch our meagre incomes and grants within our households.

“The situation of the COVID pandemic has simply exacerbated household poverty and hunger as more and more people have lost their jobs and livelihoods. Whilst we condemn the violence that is unfolding in many communities especially in KZN and Gauteng we want to stress the fact that we saw that many thousands of people, even old women and children, everywhere were taking food from the shops saying that that they are starving and cannot afford to buy food. Today in South Africa millions of poor people owe the loan sharks millions of Rands- 80% of the social grants go directly to repay loan sharks!! This is why hundreds of poor people “looted” for food.

“COVID-19 and the subsequent lockdowns have increased burdens on women, whose care work goes unrecognised by the state and the private sector. Women are holding communities together, stretching resources to help feed their families and surrounding communities. As poor people, we must unite and build strong local associations and united mass movements of the poor to make demand government to respond to our demands for jobs, peace and an end to corruption!”

Union Aid Abroad – APHEDA helps resource the Trust for Community Outreach and Education (TCOE) in South Africa, which works within the food sovereignty framework. TCOE builds the organisational and political capacities of farm worker unions, of small-hold farmer unions, of Inyanda, the national movement for land rights, and of the Southern Africa region Rural Women’s Assembly.

Support worker's rights in South Africa and beyond!

Around the world, workers are organising to build their collective power at work and in their communities. By becoming a member of Union Aid Abroad – APHEDA, you will be contributing towards projects like this that give unionists the knowledge, skills, and power to defend their rights.