STOP PRESS: Myanmar Junta not recognised at the government of Myanmar at ILO Meeting

Unions around the world worked to ensure the Myanmar Junta was not recognised as the government of Myanmar at the recent annual International Labour Organisation (ILO) meeting. Unions also campaigned for this strongly worded resolution condemning the coup, the attacks on workers and supporting the majority of the population who want to see a return to civilian rule: 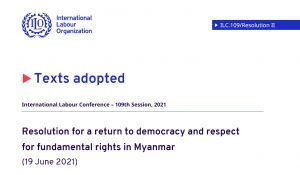 As Aung San Suu Kyi turns 76 years of age, a group of women in Australia, known as WAM (Women Activists Myanmar), launch the campaign “Free Women Political Prisoners in Myanmar”.  This is Aung San Suu Kyi’s 16th birthday in detention, and she is not alone. Over 800 women have been detained since the military coup in Myanmar and over 50 have been killed.

“The WAM campaign focuses on the immediate release of women political prisoners. This is not just because it is their human right, but because women are not safe in custody. The Myanmar military has a long history of subjecting women political prisoners to torture and sexual violence,” says Myint Myint San, a WAM spokesperson based in Melbourne and part of the National Unity Government in Myanmar.

“I am an 88’Generation activist and became a political refugee following the 1988 democracy uprising in Myanmar. The struggle for democracy has been a long one and inspiring women are at the forefront of the movement.  Some of the women who have been arrested and killed this year are my colleagues and friends. Many others are young women, known and cherished by their generation and their families.”

“One of the first protesters to become a martyr was 19-year-old Angel. Her T-shirt reflected her optimism – reading “everything will be alright,”“ says Chit Hline Pyar, an RMIT Engineering student from Myanmar.

“WAM not will let Angel’s death be in vain. We stand beside our sisters in Myanmar as they put their lives on the line for a free, democratic future. I use my freedom to demand the release of female prisoners and that violence and sexual violence against women stops immediately.”

WAM is a group of diverse women, both Myanmar born and Australian born. WAM includes women from the 88’Generation; Generation-Z activists; human rights defenders and social justice warriors. WAM supports the global campaign of the Women’s League of Burma.

Myint Myint San is the Chief of the International Cooperation Department and an advisory board member of the Ministry of Human Rights in the National Unity Government, the government in exile.

Chit Hline Pyar is and one of the founders of Victorian Myanmar Youth, a collective of young Myanmar people In Victoria who are opposed to the coup.