The bombing of Gaza in May 2021 marred the last months of implementation of a five-year Australian government-funded agriculture development project in the Occupied Palestinian Territories, which finished on 30 September 2021.

Union Aid Abroad- APHEDA and local partner MA’AN Development Center assessed the needs of the vegetable farmers taking part in the project in different parts of the Gaza Strip. The conflict had meant farmers could not access their greenhouses to maintain crops, or harvest and market produce, so a whole season was lost. Many farms, greenhouses and irrigation networks were damaged, and input supplies were blocked. 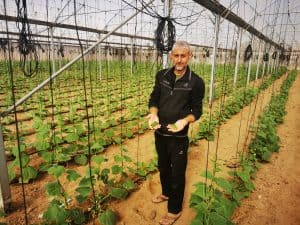 The 14-year blockade of the Gaza Strip by Israel and Egypt means the food security of the 2.1 million people in the 360 square km area is very constrained. Half the population are refugees, who can receive some food from the UN Relief and Works Agency (UNRWA). Much of the farmland is in no-go zones in border areas controlled by Israel. But local farming remains an important source of food and it was vital to restart food production as fast as possible.

In response to the immediate needs, funds within the project were reallocated to enable 32 vegetable farmers to quickly restore their greenhouses and irrigation, and access new inputs to replant, including plastic covers, fertilisers, structural supports and seedlings. Most of the farmers grow baby cucumbers and are contracted to supply local pickling factories.