The Government’s Response to Asbestos Report: the good and the bad 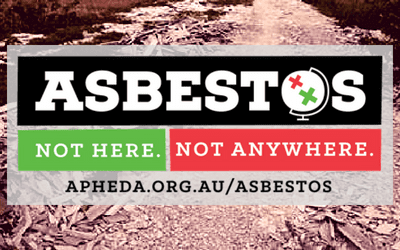 In mid-August 2018, the Government released their response to the interim report on protecting Australians from the threat of asbestos. It’s good news that the Australian Government wants to continue to play a role in our region and more broadly in achieving asbestos bans and increased awareness of the dangers of asbestos. However it is bad news that the Government didn’t support an increased testing regime, compulsory recalls of illegally imported asbestos products, an education program for importers on Australia’s asbestos ban or increasing penalties for importers. Illegal asbestos imports are stopped at our border every week. We know that asbestos containing materials are making their way into our communities and workplaces – more needs to be done to make sure importers understand Australia’s asbestos ban and take it seriously. Strong regulations in Australia and support from the Australian Government doesn’t just protect our communities, it also strengthens the campaign for bans overseas.

We’ll let you know how you can support the next steps in pressuring this Government to follow through on its commitment to international leadership and protecting Australians from the threat of asbestos imports.

So what are the results?

The government ‘noted’ the recommendations:

You can download the whole response here if you would like to read it in more detail.