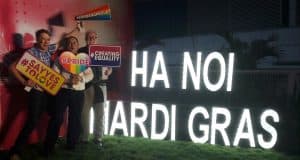 017, Mardi Gras was celebrated in Hanoi for the very first time. The final night was a colourful display of costumes and dazzling performances by both Vietnamese and Australian artists.  Union Aid Abroad APHEDA’s Hanoi-based staff – Sharan, Phillip and Peter – went along to join in the festivities.

The first public pride parade was held in Hanoi in 2012. Since then, the Vietnamese Government has enacted a range of legislative changes to improve LGBTQI rights. In 2013, fines on same-sex marriage were abolished, and a year later a constitutional provision defining marriage as a union between a man and a woman was repealed. Same-sex marriages are still not officially recognised, but in 2015, the regulations that prohibited marriage between people of the same sex were removed. That same year, new legislation allowed transgender people to register officially as the gender corresponding to their gender identity. Viet Pride has now been held five times, not only in Hanoi but in more than a dozen provinces across the country.

As the global justice organisation of the Australian union movement, we know how important it is to fight for a just and fair society for everyone. This includes fighting for the rights of our LGBTQI brothers and sisters who want marriage equality. Read our open letter in support of marriage equality.

See other Australian organisations and unions that have signed up to australianmarriageequality.org