Union Aid Abroad-APHEDA and the Center for Trade Union and Human Rights (CTUHR) are working together to educate and build the power of Filipino workers to understand the impacts of the climate crisis, and support workers to mobilise for collective climate justice campaigns.

Union Aid Abroad-APHEDA and CTUHR have a strong shared objective to educate and empower workers to understand the impacts of the climate crisis, and support workers to mobilise for collective climate justice campaigns. The Harnessing Workers and Union Power, Advancing the Campaign for Climate Justice Project is building on the successes and learnings of an initial joint pilot project last year. 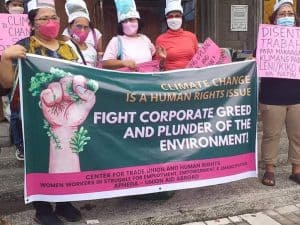 In the 2021 pilot project year, CTUHR developed a facilitator’s training module designed for union leaders to build their understanding of the climate crisis and climate organising. This year, CTUHR have consulted with partner unions and organisations, and rolled out a trial run of the training. The climate module was finalised in May this year, with improvements based on the feedback of partners and training participants which included integrating disaster risk reduction concepts into the module. A training session was conducted in July for 18 union leaders.

Through this project, CTUHR supported two partner organisations to mobilise with climate demands around World Earth day in April. Women Wise, (an informal women workers association) and the Catholic Diocese of Novaliches Labor Ministry both held events. CTUHR staff facilitated discussions with the workers about the importance of workers being actively involved in the struggle against the climate crisis. In Novaliches 214 people participated in the discussions and a rally, which took the form of a human chain.

CTUHR are also working with UMA, an agriculture workers union, to conduct an impact study to better understand the impact of climate crisis on sugar workers.

In the remainder of this year, CTUHR will hold another facilitators training workshop for union leaders. They will also connect with other interested organisations including unions, workers associations, civil society organisations and local government units on climate concerns.