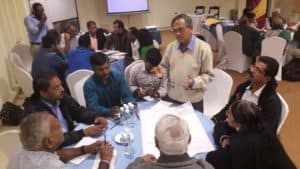 Small group work at the IBAN meeting in December 2017.

India is currently the second largest consumer of asbestos in the world. Latest trade data suggests imports of almost 308,000 tonnes of asbestos in 2016, second only to China. The Indian government has also maintained a strong resistance to listing chrysotile (white asbestos) in the Rotterdam Convention that lists hazardous chemicals. Despite prohibiting mining from asbestos mines in 2013, India continues mining other mineral sites that may contain asbestos. This means that some miners are still exposed.

These meetings were in collaboration with ABAN and IBAS. Union Aid Abroad was active in helping plan the meeting and Phillip Hazelton, APHEDA’s Asbestos Campaign Coordinator, presented on sharing other Southeast Asia Ban network experiences and lessons.

Bringing together 16 organisations consisting of Trade Unions, NGOs, victim’s organisations and individual scientists, doctors and lawyers from across India, the meeting made the momentous decision to come together and campaign as a national asbestos ban network. The network is called India Ban Asbestos Network – IBAN.

The network agreed to focus on key objectives including: