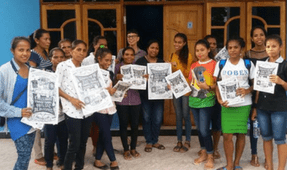 Currently over 180 Domestic Workers are accessing the services of the WWCTL including regular training for workers in core skills to undertake their work and assistance for trained workers to find employment. Of these, almost 50 women are involved in the WWCTL organising group who meet monthly and strategise how to improve the situation for domestic workers in Timor Leste. Along with dignity at work, skills development and employment support, the central objective of the WWCTL is to have Domestic Workers in Timor Leste recognised under Timorese law with access to decent working conditions and the right to legal protections.

In 2016 and 2017 domestic workers joined in Dili’s May Day rally alongside other workers. Demonstrating a public face has been an important step towards Domestic Workers being recognised in their own workplaces and the community, as members of the labour force with entitlements to fair conditions and protections.

On Friday 16th June 2017, the Working Women’s Centre celebrated International Day of Domestic Workers for the first time. A core group of activists planned and coordinated a public event including presentation of theatre performances highlighting the situation for many Domestic Workers in Timor Leste based on their own experiences of exhausting hours and arbitrary treatment by employers.

The community meeting was attended by Elidio Ximenes, Secretary of State for vocational training for youth and employment. Mr Ximenes expressed support for the event and presented the first draft legislation to enshrine the recognition of Domestic Workers in Timor Leste and spoke of the need for Domestic Workers to have legal contracts.

Union Aid Abroad APHEDA would like to congratulate the dedicated WWCTL team for reaching this important step in their tireless campaign to achieve dignity and fair working conditions for Domestic Workers. We look forward to the celebration of future International Domestic Workers’ Days in Timor Leste with a regulated workforce and improved working conditions for the hundreds of women currently working in this industry.