What are you going to do for International Women’s Day?

International Women’s Day is fast approaching, which means that here at Union Aid Abroad-APHEDA, we’re thinking and talking a lot about gender equality. There are a couple of worldwide trends that we think are worth taking a closer look at – and we’ve identified some actions you can take close to home to support women’s rights.

There are few countries where women feel even reasonably safe. Take a look at this map of the physical security of women worldwide.

Despite Australia’s yellow rating, existing services to support women and those in violent and desperate situations are under attack. Early in February, 1800RESPECT, the national telephone and online counselling service for people experiencing domestic or sexual violence, was put out for tender. This means that victims of rape and domestic violence who call the service may end up reaching employees of a call centre run for profit at the lowest tender price instead of specialist and experienced counsellors.

Support the ASU’s petition to Parliament to directly and fully fund Rape and Domestic Violence Service Australia to provide 1800RESPECT and other specialist services here:  http://www.noprofitfromrape.org/ 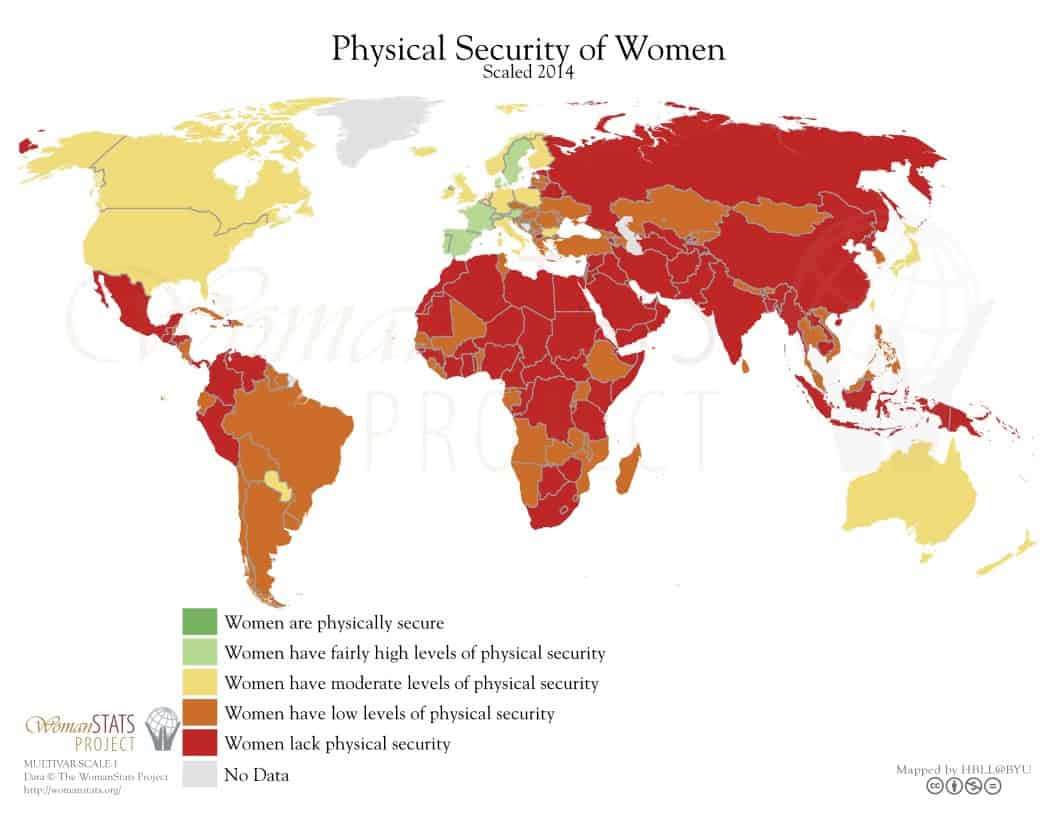 Worldwide, a woman earns an average of $76 for every $100 paid to a man. With a pay gap of 18 per cent, Australia sits in the bottom 10 of countries in the OECD when it comes to gender income disparity.

Worse, Australian women will be hardest hit by the recent cuts to penalty rates. Women make up about 55 per cent of the retail and food services industries, the two industries most affected by the cuts. Women also make up more than 70 per cent of the part-time work force, so they are much more likely than men to be working weekends and on public holidays. With these figures in mind, it’s clear that the cuts to penalty rates will increase the gender pay gap in Australia – a pay gap that has already doubled (from 8 to 15 per cent) in the last five years for young workers (aged 20 to 29).

Sign the ACTU’s petition against the cuts to penalty rates here.

Women spend two to ten times more time on unpaid care work than men.[OECD] This issue is often put in the “too hard” basket, and very little is done to address it. It’s a contributor to the gender pay gap and the low representation of women in national assemblies over the world. And when it is paid, domestic and care work tends to be done by migrant women who are undervalued, face discrimination and earn low pay.

Part of the solution might be re-thinking masculinity so that childcare and domestic work are valued and seen as everyone’s responsibility. But what are the next steps?

Let’s start with participating in events around IWD, let’s have those discussions about what we do here and how we can support our sisters across South East Asia and elsewhere.

Check out the International Women’s Day event in your nearest capital city: