In August this year, special guest speaker Naw K’nyaw Paw, General Secretary of the Karen Women’s Organisation, will be in Australia to speak about the struggle for justice for the Karen people, the fight for women’s rights in the refugee camps, the stories of Karen refugees along the Thai-Myanmar border, and the pursuit of peace and security in Myanmar.

Naw K’nyaw Paw was born in Thailand, and as a young child she grew up in a refugee camp on the Thai-Myanmar border.

“I was born displaced. I spent my entire childhood either running or in refugee camps. Imagine being an 11 year old girl, coming home to see your village empty, your family gone, and spending days wandering from settlement to settlement, looking for your family. I was that 11 year old girl.”

K’nyaw Paw began working for the Karen Women’s Organisation in 1999, and was elected General Secretary in 2013. The organisation now boasts a membership of more than 65,000 women.

“The Karen Women’s Organisation aims to assist all Karen women to be free from all forms of oppression.”

The Karen Women’s Organisation is a feminist, indigenous rights, community-based organisation that plays a leadership role in the struggle to bring democracy and human rights to Myanmar. It focuses on increasing and amplifying women’s voices and influence, as well as providing services to women and children.

K’nyaw Paw will be visiting Sydney, Melbourne and Canberra. 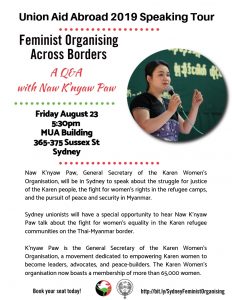 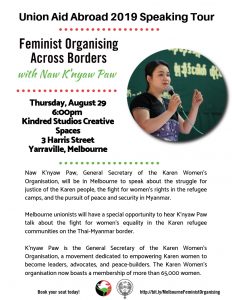