Life Without a Union? We Can Change That! 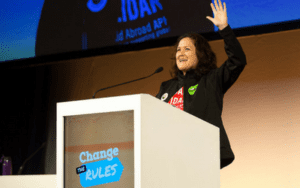 I would like to acknowledge country, the Turrbal people. I recognise their sovereignty was never ceded.

Comrades, friends, it is a great pleasure to speak here today. I acknowledge all of our international guests, the elected leaderships of all unions in our movement, the newly elected President Michele O’Neil, the returned ACTU leadership and all delegates at Congress.

Union Aid Abroad-APHEDA, the global justice organisation of the Australian union movement, has very proudly represented our movement internationally for 33 years. It was at the ACTU Congress of 1985 that APHEDA as it was then known, was formally established, the brainchild of the ACTU President at the time, Cliff Dolan, along with an Australian nurse, Helen McCue. I became a union member the same year APHEDA was established, 33 years ago and, as a former union delegate and organiser, I wear my Australian unionism with great pride when I work with unionists around the world.

Union Aid Abroad’s support to union movements and social movements around the world has been part of the struggle for liberation, freedom and democracy. It has worked for human rights, workers rights. It has been a vehicle for thousands of Australian unionists to be connected to the world – through the sharing of skills, exchange and practical financial support to help build strong movements, to express our movement’s international solidarity.

But our world is in danger. Corporations dominate, working hand-in-hand with conservative governments in so many countries globally. If you look at the global picture we hang on a precipice, faced with rapidly rising inequality, not just here as we heard from Sally yesterday, but in almost every single country in our region, massive exploitation across all supply chains with conditions akin to forced labour and often bonded labour, migrant workers where rights and liberties are simply stripped from them as a result of entering into an employment contract in another country. We face planetary destruction through global warming which threatens us as workers. Everybody knows that our region at the highest risk of extreme weather events with death and destruction wrought upon workers as a result, but the impact of heat at work for millions of people in our region is enormous. Think about the impact on workers in Cambodia, for example those working outdoors in the construction industry: unable to work 10 hours a day due to the impact of heat, they cut their hours to 7, and as they are paid by the hour, suffer a major drop in take home pay. Research by the ILO and ITUC in 2017 showed this is a real scenario in the very near future. Global warming will cut the GDP of poor countries too, further increasing the impact and deepening inequality.

And then there is the despots who rule with incredible personal wealth: whether it’s a US President making policy by tweet or a Filipino President boasting about killing 20,000 civilians within 2 years of office, the urgency of our charter as unionists is focusing us as never before. They seek to represent the 1% and not the 99%. Only global organised movements like ours will hold them to account.

Every year the International Trade Union Confederation rates countries on indicators for human rights and union rights rating countries in 5 areas : civil liberties, rights to establish or join unions, rights to conduct trade union activities, right to bargain, right to strike. The ITUC global index of the top 10 worst countries in the world for working people includes 3 in our region, the Philippines, Cambodia and Bangladesh.

This what the ITUC said about the Asia-Pacific region in June 2018 when it rated a decline over the past 12 months:

“Conditions in Asia-Pacific have deteriorated with an increase in violence, criminalisation of the right to the strike and a rise in arrests, detention and imprisonment of labour activists and trade union leaders. All 22 countries in the region violated collective bargaining and the right to strike. Mass dismissals of workers for exercising their rights were found in Indonesia, where 4,200 workers were laid off by mining operator PT Freeport ; Myanmar, where 184 union members were made redundant ; and Cambodia, where 558 workers were fired after a strike at the Gawon Apparel Factory”.

Here are some quotes from workers in this report:

“I was in Saudi Arabia for three years. There were nine members of the family. I had no leave, no day off, and was always working apart from when I got to sleep for a few hours. I worked for at least twenty hours a day.”

“Samsung use Mafia, they use police. They buy soldiers, they buy police, they buy government.”

“If you buy a box of a bananas from a non unionised plantation you know the worker has endured exploitation.”

“In those places where there is no union, they cannot defend their rights.”

Just as we prioritise in Australia to fight inequality and corporate greed, so too do unions in every country. We need to urgently Change the Rules internationally to stop massive wage exploitation through unchecked corporate greed with its corrupting influences on governments – governments that can take action to regulate nationally against worker exploitation, against modern slavery. It’s up to us to support the collective organising of workers most exploited along the supply chain, yes in our domestic supply chains but also in international supply chains. We need brave and courageous strategies that we agree to fund to fight the injustice.

We must, as unionists, embrace a new vision of human development : free from exploitation and discrimination of all kinds- racism, sexism, discrimination based on disability or sexuality.  With 240 million people moving every year for work globally, with 45 million people in modern slavery, make no doubt, we need new global rules.  The challenge of a new form of labour-led development must ensure we support unionists in every country organise and campaign to change the rules at sovereign national level, together with our coordinated global activism of our joint movements.

There are so many global stories of organised movements challenging and fighting back against the extreme and obscene wealth and inequality – at the workplace and well beyond. Take the campaign by garment workers in Cambodia for increases in the minimum wages, or the global campaign to end kafala system (or bonded labour system) in Qatar, or where daily, workers in Myanmar are fighting back to reinstate sacked union activists, where the combined union and social movements of South Korea held a corrupt President and Samsung to account and changed the government.

These campaigns inspire us all that it is possible to win. But it needs organised people, resources and money.

Globally every Australian union is linked into a global union to coordinate campaigning along industry lines. There are sister organisations to Union Aid Abroad that also exist in many countries. Together working cooperatively we have shown our movement can dent global capital, big time. But those rising inequality statistics mean we aren’t winning fast enough.

This is why future Australian governments must fund trade union development. Wealthy, first-world countries like the US, Japan, the Netherlands, Norway, Finland, Sweden, and Denmark all recognise the role of trade unions and fund trade union development within their own overseas aid budgets. This arrangement has existed for decades regardless of which political party is in power.  To date, no Australian government has ever been willing to do this. This must change. Our movement must demand political support to challenge poverty, exploitation and inequality – in the best way our history has shown, through strong, accountable unions that fight for wage increases and gains to the social wage in every country in our region. We can demand our future governments provide overseas aid funding for trade union development in our region – in Asia-Pacific. Because we know life without a union means poverty, it is that simple. Don’t be fooled by the rhetoric of what ‘lifts people out of poverty’ in poor countries – the political and business elite in rich and poor countries have many solutions. It is only with ‘labour-led development’, and with organised, united trade union movements, can workers win the demands for equality and just wages. What we know, is also true for every country in the world: Collective power of unions works.

Finally, I want to let you know how important individual membership of Union Aid Abroad is to our movement’s contribution to the global struggle. We workers will always be the grist of global capital unless we have the organised people to fight back, in every country. In today’s globalised world, we cannot think we are immune to the organised attacks of capital. We are not. Our flagship campaign to ban asbestos in Asia is a perfect example of this –  despite our own Australian ban on asbestos, we remain vulnerable to illegally imported asbestos products because there still is no global ban on asbestos use.

So I am asking every one of you to join Union Aid Abroad at this Congress if you are not already. Hands up those you are members already?! The majority of people at this Congress are not members of Union Aid Abroad, only 30% of you are. Visit our stall before the end of today, and sign up for $15 a month or more if you can. Get active in one of our activist groups around the country. Let’s Change the Rules.

We know every worker in every country deserves the right to join a union.

Life Without a Union? Together We Can Change That!

Kate Lee of @apheda addressing #ACTUCongress18 on organising in our region. “We need new global rules.”

In Myanmar, in Cambodia, in South Korea, we need to #organisetowin

We need to fund labour-led development. So become an APHEDA #globaljusticepartner!#ausunions pic.twitter.com/s4C4aAEhAz