LION ramps up the fight against asbestos in Indonesia 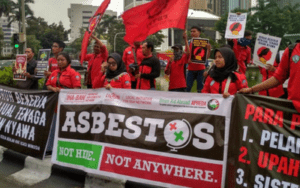 Union Aid Abroad-APHEDA has partnered with Local Initiative for Occupational Safety and Health Network (LION) Indonesia since late 2015. This education and campaigning organisation is based in the University town of Bandung, West Java and plays a key role in the pursuit of banning asbestos importation, manufacture and widespread use across Indonesia. A founding member of INA-BAN, Indonesia’s Ban Asbestos Network LION has been a key player in the Union Aid Abroad – APHEDA’s Asbestos. Not Here. Not Anywhere. Campaign across South East Asia.

LION’s activities include educating workers in factories and organising local medical professionals to join the campaign. In the past 12 months, LION has focused on organising victims of workplace accidents, injury and illness to work collectively and support the fight against asbestos importation, manufacture and use across Indonesia.

The absence of any legislation or law enforcement regarding the importation and use of asbestos in Indonesia has led to the country being one of the highest importers of raw asbestos in the region. Between 2007 and 2017, 1,269 metric tons of raw asbestos were imported into Indonesia with almost 90% of the raw product being used to produce asbestos roof sheeting, primarily for the domestic market. The rest of the asbestos is used to manufacture brake canvas, gaskets and insulation.

One of the primary challenges in the campaign to get asbestos banned from Indonesia is to have asbestos related disease officially recognised by the medical profession and government departments responsible for labour, health, trade and infrastructure. Misinformation provided by exporting countries to the Indonesian government over many years has led to a widespread belief by workers, communities and leaders that white chrysotile asbestos is safe. LION joined an international delegation (along with representatives from Australian unions and Union Aid Abroad – APHEDA’s Phillip Hazelton) to Geneva last year to provide a human face to the health impacts of chrysotile asbestos exposure at the Rotterdam Convention discussions. Unfortunately, the complete ban was again voted down meaning the international campaign continues. Read more about the COP 8 Rotterdam Convention meeting 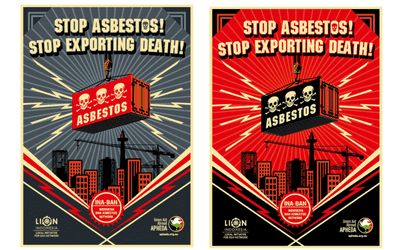 In 2017, LION had several significant wins. The first ever compensation case for asbestos related disease in Indonesia was awarded. Although the compensation amount was quite low, the significance of this victory as a first step towards national recognition of the dangers of asbestos exposure is enormous.

LION and the unions supporting other workers with asbestos related symptoms are now seeking compensation for a further nine people and the numbers will continue to rise.

LION also commenced organising and training workers and unions about asbestos dangers and established a network of workplace OHS victims including those who have been exposed to asbestos. This group of injured workers is expanding and organising to campaign for greater recognition of workplace OHS standards and the dangers of exposure to deadly substances. An OHS survivor forum was established and victim organising groups are starting to collect data and map injuries and illnesses. They are being encouraged not to be silent but instead to fight collectively for change particularly in the heavy industry areas of Indonesia such as Bogor, Karawang and Bekasi. Organising and group discussion with victims and their families has led to joint worker and community education sessions which LION continues to roll out across these key regions.

Another key part of LION’s campaign strategy is the local focus on the city of Bandung where they have a plan to model national asbestos ban implementation at a local level. Thus, they are working closely with local politicians, university groups and media outlets to push for an Asbestos Free Bandung. The local campaign has already achieved enormous support particularly from local politicians who are working with LION to draft asbestos ban legislation and engaging in joint research to strengthen data. Part of the local campaign involves monthly community education days on Bandung’s car free Sundays where LION’s campaigners hit the streets to provide information to people on asbestos dangers. 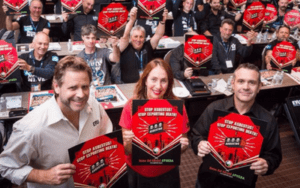 One of the secret ingredients to LION’s growing success is a talented and passionate communications team who produce cleverly designed and prolific promotional materials to support the campaign and who successfully supported the launch of the INABAN website last year. Union Aid Abroad has now begun incorporating LION’s designs into our Australia-based campaign work. One of LION’s brilliant asbestos poster designs was used for some new Asbestos. Not Here. Not Anywhere. campaign posters which were used at the Victorian ETU Delegates’ Conference to demonstrate Australian unions’ continuing solidarity for the campaign. Check out LION on Instagram to see more design work and campaign updates.

In early May 2018, LION’s coordinator Darisman and SERBUK union leader Subono travelled throughout Australia on an Asbestos speaking tour, highlighting the enormous task before workers and communities in Indonesia and across our region. Many union members and leaders heard for the first time about their struggle and vowed to join the campaign as members of Union Aid Abroad APHEDA. Read more about Darisman and Subono’s visit

To find out more about Union Aid Abroad – APHEDA’s Asbestos. Not here. Not anywhere. Campaign and how you can get involved, visit www.apheda.org.au/asbestos or contact Emma.