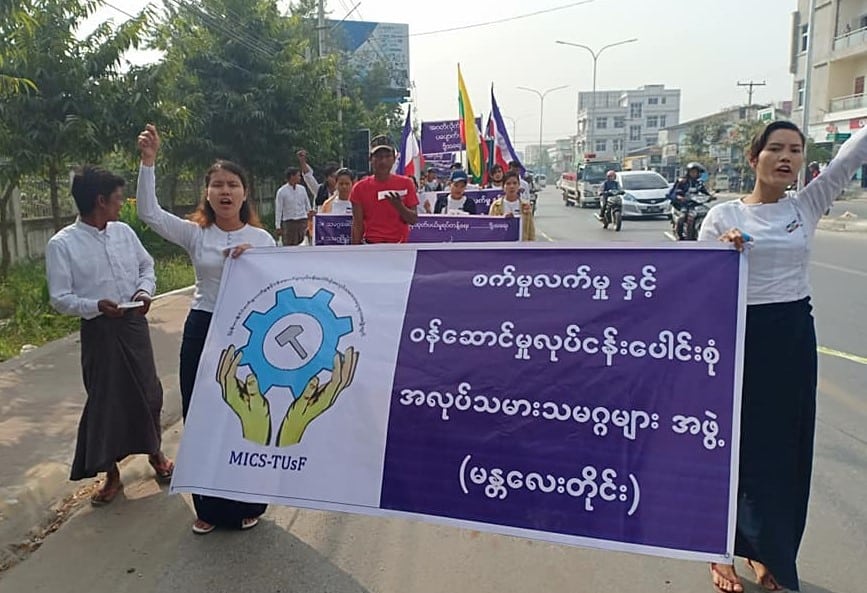 Around 300 workers from 20 factories in the Mandalay Industrial Zone, all members of the Myanmar Industries, Crafts and Services (MICS) union, staged a protest on 9 December 2018 to decry the rampant unfair dismissal of union leaders. Addressing workers in a speech at the protest, MICS-TUsF general secretary U Thet Hnin Aung, highlighted the issue of union leaders being unfairly dismissed.

Unfair dismissal of union leaders on the rise

Within the last quarter of 2018, MICS has handled various cases of unfair dismissal. For example the dismissal of union leaders at the Tharabar Gate Hotel in Bagan as well as at Miko Coffee Mix, Myanmar May Kaung Timber and Ve-Soft Drink factories.

Despite Myanmar ratifying the ILO Convention 87 – freedom of association and protection of the right to organise – the government still needs to put more effort into ensuring workers’ rights to unionise. Cases of union busting and the dismissal of trade union leaders in the Mandalay region highlights how the regional government is failing to protect the rights of workers.

“The government must ratify ILO Convention 98, eradicate corruption, appoint a new labour official in the region and amend the labour law to ensure the protection of the rights to trade unions. The 2012 Dispute Settlement Law is not sufficient enough to protect the union leaders from companies’ retaliation” said Thet Hnin Aung, General Secretary of MICS.

On 10 December 2018, the chief police officer from Pyi Gyi Ta Kun Township filed a case against MICS-TUsF for violating Article 20 of The Right to Peaceful Assembly and Peaceful Procession Act. Article 20 of the Act states that “the crime against which an action is taken by this law is a crime actionable by the police.”

In this case, the police deemed MICS-TUsF violated Article 20 for holding a poster of the State Councillor Daw Aung San Su Kyi and the late General Aung San. The workers held the two posters to show their faith in Myanmar government to restore and protect the workers’ rights in the country.

On 12 December, the police deemed MICS-TUsF violated Article 20. However, they said that the reason was no longer because of the posters of Daw Aung San Su Kyi and the late General Aung San. It was because MICS-TUsF members were holding a poster on Tharabar Gate strike. According to the Peaceful Assembly and Peaceful Procession Act, any groups planning a demonstration must report to the police beforehand with a list of slogans and posters to be used at the rally. The police argued some posters in the rally were not reported to them beforehand. 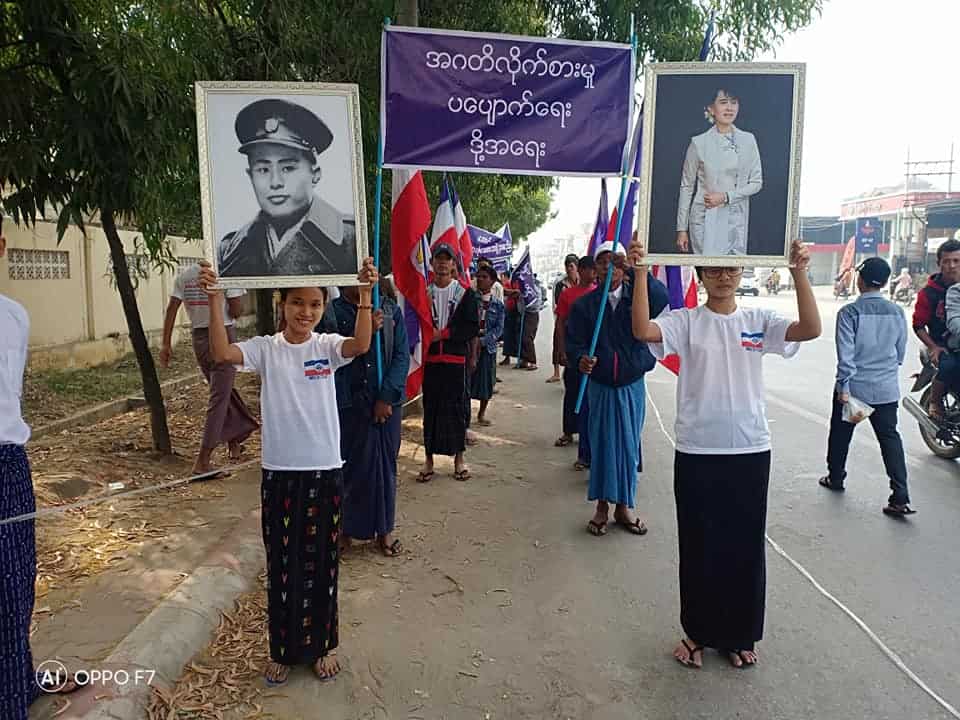 MICS-TUsF demands the government appoint a new regional labour minister in the Mandalay region to take actions to resolve industrial disputes. In a Statement, MICS-TUsF also demands the police drop the charge against them under Article 20 of The Right to Peaceful Assembly and Peaceful Procession Act which further indicates the lack of commitment of the Mandalay regional authorities in protecting workers’ rights.