MAP Radio – A lifeline for migrant workers in Thailand 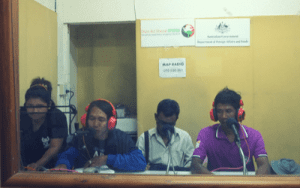 The Thai cities of Chiang Mai and Mae Sot are both within close proximity of the Thai-Myanmar border. Due to their location and job opportunities, both have become popular destinations for migrant workers from Myanmar seeking to flee conflict and a lack of opportunity. Today hundreds of thousands of migrant workers from Myanmar live and work in Mae Sot and Chiang Mai, often settling with their families.

Unfortunately, for many of these workers, the hope of a peaceful and more prosperous life in Thailand is quickly thwarted with many becoming subject to entrenched exploitation. Employers and government officials often benefit from the cheap labour of Burmese migrant workers, without any willingness to accept responsibility for their wellbeing or social care. In response to this issue, Union Aid Abroad APHEDA worked alongside local NGO, Migrant Assistance Program (MAP) Foundation to support the development of MAP Radio.

MAP Foundation, established in 1996, has been running community radio stations to support migrant workers’ rights in Chiang Mai (FM99) and Mae Sot (FM102.5) for over twelve years. MAP Radio broadcasts in migrants’ languages on a number of issues to support migrants’ health and rights. Radio is a great tool as it reaches many migrants over a dispersed area. Over the years MAP Radio has become a trusted source of information for migrant workers and their families. Broadcasts are interactive with call-ins from migrants to ask questions or share their own experiences.

Programs disseminate accurate information on migration and labour rights issues, as well as other issues such as women’s rights and health, child rights and education and social inclusion. All programs aim to improve migrants’ quality of life in Thailand and support migrant workers to overcome exploitation and abuse. MAP Radio’s programs help connect migrant workers; both men and women and those from different ethnicities and nationalities, and to promote public participation and civic engagement.

Building and maintaining rapport with the migrant community

While the needs of migrants have remained constant over the years, communication technologies have changed. The internet has become more accessible as more migrants own and use smartphones. Since many migrants equate Facebook with the internet and use it as singular news feed, MAP started simultaneously broadcasting all of its radio programs on Facebook Live. This has increased listenership considerably but has raised questions at the same time regarding migrants’ behaviour with social media platforms. In 2018, MAP Radio conducted a survey on migrants’ use of social media and the internet, the analysis of this is currently being finalised.

MAP has partnered with BBC Media Action in Myanmar for over a year now sharing their broadcasts about migration in Burmese and receiving capacity building training. At the end of February 2019, the BBC team came and coached MAP Radio through an “Open Radio Day” event, which was a live broadcast where officers from the Thai Employment and Social Security Offices, along with a representative from the Myanmar Consulate and the Mekong Migration Network talked with a live audience of migrant workers. MAP Radio then made segments out of the presentations and rebroadcast them. The segment on Social Security drew the most interest.

MAP Radio also does outreach with the migrant community to introduce themselves to new and hard to reach communities, to promote their radio and to build a rapport with a community that does not trust outsiders easily. When they have problems or questions, they will call MAP. This year MAP primarily reached out to construction camps and agricultural workers in Chiang Mai and Mae Sot areas.

Coming to grips with new technology

Broadcasting via Facebook Live has demanded a higher quality of broadcasting. As it provides the option of video, MAP Radio are now renovating their studio to provide more space for engagement with listeners that come into the studio. For DJs who do not wish to be viewed, MAP Radio has made colourful banners for each DJ to post when broadcasting.

MAP Radio has upgraded computers and soundboards with assistance from Union Aid Abroad – APHEDA, to accommodate the new technological demands of internet broadcasting. To make it easier to navigate, MAP also plans to release a new mobile app that provides schedules, links to broadcasting and allows migrants and other listeners to interact easier. In other words, MAP Radio is on a learning curve with the new emerging technologies. Next year will see MAP Radio build the capacity of its staff and volunteer DJs in broadcasting technologies over Facebook Live and FM frequencies while maintaining the quality of their programming.