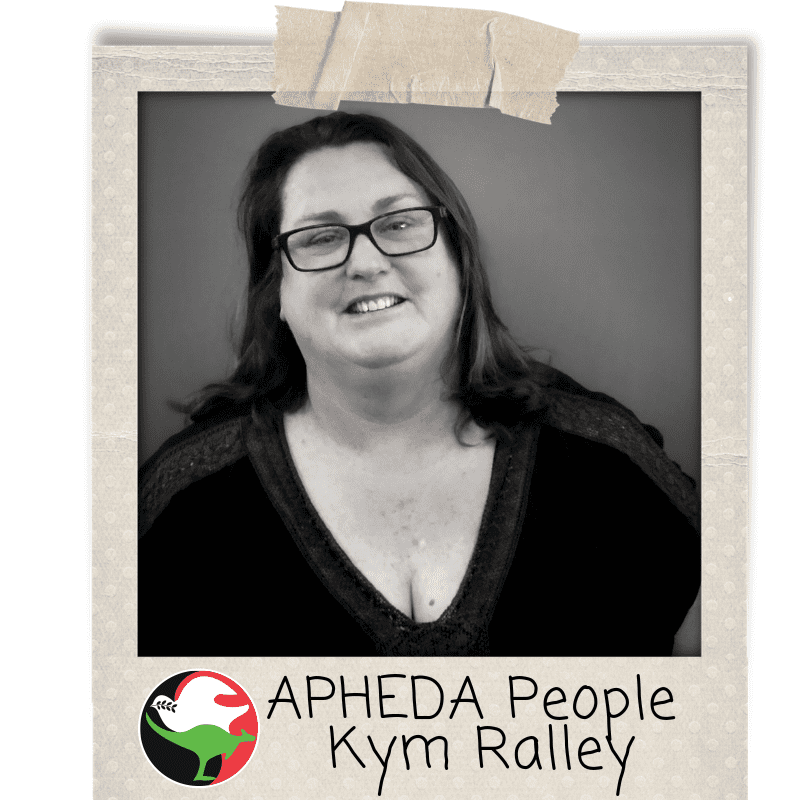 Kym is a longtime supporter of Union Aid Abroad – APHEDA and a dedicated Change the Rules activist. Kym’s support of APHEDA means she’s also dedicated to changing the global rules!

To me, being Union is looking out for each other. Being Union is making sure your workmates are not exploited by the ‘boss’ arriving to and from work safely and being responsible for not just ourselves but for all of us!

Union Aid Abroad – APHEDA makes the world a safer place for the most vulnerable people. APHEDA is about worker-to-worker solidarity – it’s about workers here in Australia standing with workers in Cambodia, Laos, Vietnam, Indonesia, Timor Leste, Myanmar, Palestine, Zimbabwe, South Africa, Pakistan, The Philippines and Samoa amongst others. This is an extension of being union. Solidarity is why I am involved in Change the Rules and why I like to support APHEDA.

Knowledge is power. Each and every member makes a difference. If APHEDA grows its membership base, more people will be making positive contributions to overcome some of the horrendous challenges that people face around the world.  I can’t think of many organisations that are run so transparently and which don’t want to make money out of the desperation of poor people.  I really respect that APHEDA works with vulnerable workers and indigenous people in other countries and tries to build up their capacity so they can work for their own futures.  It’s important that we don’t just pretend that we can fix other people’s problems but that we can work together and support them to work through their own problems. Not a member? Join today!

I am particularly proud of the activities around the Asbestos campaigns. My father died from complications of asbestos. The Union movement looked after my father over 25 years ago. It is great to see that APHEDA is at the fore of campaigns to achieve asbestos bans in Southeast Asia and to raise awareness of the dangers of this dreaded fibre and its associated diseases. Asbestos is evil.  I hated seeing what happened to my Dad and I hope APHEDA is successful because no one deserves that death. I also hope that part of the campaign encourages people here in Australia to remember the dangers of asbestos and teach young people about them.

I believe in the right for all people to be safe from exploitation and to be treated fairly as workers and as citizens.  I think that it feels like things are getting tougher and harder for ordinary workers in so many countries around the world.  I believe in worker’s rights.  I don’t believe that union leaders should be prosecuted for standing up for their fellow members or citizens. I believe in people having rights to determine how their own countries are run.  I worry about how much power lies with big corporations and how people seem to be less important.

I’m a part-time low paid worker.  I try to talk to others about what APHEDA does and people are genuinely interested and want to know more about the organisation and what it is all about. I don’t know much more than what I read on the Facebook page but I read those stories and start talking and realise that I have learned quite a bit about global solidarity and how APHEDA makes a difference.  I guess it makes me feel hopeful that when good people work with other good people and together it makes a difference. When I talk more about the work of APHEDA, people are keen to join and my friends know that I respect APHEDA.