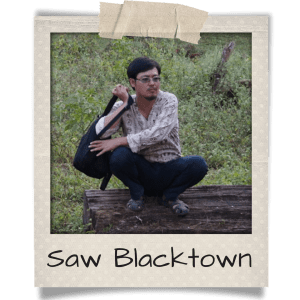 Meet Saw Blacktown. Saw Blacktown was born in a rural village in central Karen State, Burma. Growing up in an area heavily affected by armed conflict and militarisation, Saw Blacktown left his village as a teenager. Crossing the border into Thailand, he became a refugee in his quest to seek further education in a refugee camp on the Thai-Myanmar border. Saw Blacktown now works for APHEDA’s partner organisation, Karen News.

How long have you been working with Karen News and what is your role?

Karen News was established in 2011. I am one of the founders along with my other colleagues from different Karen organisations who also work in media. I started as a reporter for Karen News and am now one of the editors as well as a producer and team leader for our Karen News mobile video team. We came together to form Karen News to tell stories and reports about issues that happen in our Karen community to the outside world and to the Karen diaspora.

Karen News reporting focuses on social justice issues that give priority to the voices of the community to make their story heard as well as to inform policy makers, authorities and agencies about issues that affect the Karen community. These include land rights, the environment, development, land confiscation, refugee/IDPs, conflict, the peace process, drugs, as well as the situation for women and children in conflict. Rather than reporting on the policy, Karen News looks at the impacts of the policies on the daily life of the people to help our readers make informed decisions.

What are some of the challenges your organisation faces?

As Karen News is an ethnic news and not-for-profit organisation, we are often under-resourced in terms of both human and financial resources. However, this doesn’t stop us from continuing our important work to keep our readers informed about issues that have an impact on their daily life. In addition, press freedom in Burma is limited and makes our work harder to do investigative reporting on sensitive issues such as illicit drugs, mega-development/investment projects and land confiscations that are often linked to powerful people or institutions. There is a lack of legal protection for media workers where the rule of law and an independent judicial system is still in question.

Press freedom in Burma is limited and there are oppressive laws that target media workers including Section 66 (d) of the Telecommunications Law that is often used to sue journalists. The government boasted media was its fourth pillar, but instead of giving protection, such laws are threatening and silencing media workers from doing their reporting. Media law is still being drafted and even in the draft, experts have pointed out that instead of giving protection and freedom, its aim is to limit press freedom and to control the media. This needs to be closely monitored by international press freedom organisations and pressure needs to be made to allow more media freedom in the country.

Are there any journalists you know of who have suffered, lost their lives or been imprisoned for performing their jobs who you would like to draw attention to?

Freelance journalist Aung Kyaw Naing (also known as Ko Par Gyi) was murdered by Burma army soldiers while trying to cover a story about conflict and human right abuses committed by the military in October 2014. Justice has not been brought to his family and his case was closed controversially. Reuters journalists Wa Lone and Kyaw Soe Oo were arrested in December 2017 for their investigation into the massacre of Rohingya civilians in Rakhine State. They were sentenced to seven years in prison and it is believed they have been framed for violating the Official Secrets Act. Although amnesty was granted to several prisoners during Burmese New Year in April 2019, Wa Lone and Kyaw Soe Oo were not among those freed. Wa Lone and Kyaw Soe Oo have just been honoured with the 2019 Pulitzer Prize for International Reporting for their special report ‘Massacre in Myanmar’.

APHEDA is the global justice organisation of the Australian union movement. What does it mean to be union to you?

Union is strength. A collective force to fight against injustice and unfairness. We have seen how if people are divided – whether it’s at work or at war – they are easily defeated. We see many workers who don’t have the protection of a union get exploited, injured, cheated – this happens if workers don’t have the protection of a union. In Burma workers have to use dangerous chemicals or substances without protection or knowledge – this causes health problems and when it does, workers are sacked. Karen News mentor, Phil Thornton, is a strong unionist who also works with the International Federation of Journalists (IFJ) so we use union principles and ethos in our daily work.

When we first started Karen News we were not aware of Union Aid Abroad – APHEDA. However, Phil (our mentor) told us about their work and APHEDA gave us a small grant to build our website (www.karennws.org). APHEDA stands by us and without its support, we would find it hard to continue. Karen News knows APHEDA supports grassroots organisations and it was one of the first to support us – that means a lot to us.

Why do you think it’s important for people to join APHEDA?

It’s important for people and workers to join with APHEDA, not only because it helps workers around the world fight for their rights and awards but it is also gives a voice to marginalised and vulnerable communities. Every contribution people make is meaningful and helpful to help these communities to stand up for their rights and protect their families.