Migrant workers in Thailand under the new decree 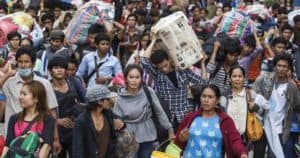 On June 23 Thailand’s government enacted the ‘Decree Concerning the Management of Foreign Workers’. This decree threatens unregistered migrant workers in Thailand with long prison terms and large fines and inevitably makes it easier for corrupt officials and unscrupulous employers to abuse and exploit them. The decree, which was announced with little notice, puts migrant workers at threat and has prompted thousands of migrant workers to flee Thailand and return home to Myanmar.

Union Aid Abroad APHEDA’s Myanmar Labour Reporter, Htet Htet, reports on the struggles of Myanmar migrant workers in Thailand, and the impacts they are facing as a result of this new decree.

After attempting for three days to complete the necessary documents to return to Thailand as a documented labourer, Aye Aung, one of the hundreds of thousands of illegal migrant workers returning from Thailand, groaned “It’s a much more difficult process than I first imagined”.

Aye Aung, a 28 year old woman from Myay-Ngu village in Myin-Mu Township, Sagaing Division, spent her early life in her village, where she worked as a helper on her family’s farm. When she turned 20 in 2008, climate change impacted the farms output. There was a severe lack of rainfall and unpredictable weather patterns quickly led to the farm becoming unproductive. Family members were forced to find new jobs as income from the farm wasn’t enough to support the eight family members living and working on the farm. Aye Aung went to Myanmar’s second largest city Mandalay, 80km from her village, to seek paid employment.

After working as a maid for two years in Mandalay, she was contacted by her friend who was working at one of the factories in Mae Sot, Thailand. When she found out her friend’s monthly income was six times higher than her own, she immediately left her job as a maid and went to Thailand. Despite being an illegal migrant worker, she was able to earn about 200,000 Kyat (AUD$185) a month.

“Working at a factory in Thailand wasn’t that hard for me as I was already familiar with heavy work from my time on the family farm. At night, I also worked a part-time job at a grocery store owned by a Myanmar couple. I earned extra money to help feed my family back home. I had hoped I would eventually be able to open a small shop in Thailand but when the Thai new labour law was enacted, all my dreams were crushed. I asked local labour leaders what I should do, and their advice was to return to Myanmar and go through the legal process to become a documented migrant worker.  “I tried this, but every step of the process in Myanmar was difficult” sighed Aye Aung.

Myanmar’s labour minister announced that they welcome the return of illegal migrant labourers from Thailand, and released a statement saying they will try to help workers who want to work in Thailand legally. According to the statistics of the Labour Ministry, over 40,000 migrant labourers have returned home from Thailand and labour experts guess that this figure will reach more than 80,000 as migrant workers continue to return.

Thaik Soe Moe, a township labour officer from Myawaddy (a town bordering Thailand directly across the river from Mae Sot), explained that in general all the workers returning to Myanmar are undocumented. “According to our State Chief Minister, we are welcoming the returning workers and will arrange for them to stay in our city and organise transportation for them to return to their homes” explained Thaik Soe Moe. He went on to allege “that nearly all of the workers had refused this assistance and returned to their homes on their own”.

Labour Ministers from both countries held lengthy bilateral talks on the issue and made a recent joint announcement that both parties agree on an array of issues. These include legalising illegal workers; resolving disagreements between employers and workers; continuing to issue Certificates of Identity (CI); passport renewal and issuing work permits and visas for migrant workers. On the surface this gives the impression that both countries are working to lessen the impact of the decree.  However, Kyaw Aung, one of the returning migrant workers, sees things differently. He explained that “all the sweet words and plans of the Thai and Myanmar governments were just persuading and lying words”. Kyaw Aung shares the view of many affected migrant workers that the joint announcement is really just for show, and that no real action is being taken to assist workers impacted by the Decree.

Returning to Myanmar is neither easy nor cheap!

“My boss told me to go back to Myanmar but it is not so simple. Most people think I can just pack my luggage and go back but this is not the case. Our broker rounded up illegal workers like me and took us to the Thai Police station where they negotiated a fine. I had to pay 2,000 Baht (AUD$75) to the broker for that process. We then “pretended” to be arrested and the police gave us some documents explaining we were being transported to the border. The total amount I had to spend to get back to Myanmar was 3,500 Baht (AUD$132)” exclaimed Kyaw Aung. “I have been working in Thailand for five years.  All the arrangements for me to work in Thailand were arranged by my employment broker. The broker now promises me that he will contact me when the situation in Thailand returns to normal. No doubt I will have to pay another large sum to return. It is hard for migrant workers to learn about changes to employment laws and how to adapt as they have to spend all their time working.  Nobody, not my employer and no employment officer ever explained the changes to me”.

According to migrant labour organisations in Thailand and Myanmar, there are nearly four million Myanmar migrant workers in Thailand. Most of them are working in livestock and fishery, garment factories and blue collar jobs such as hospitality, domestic work, and as guards for farm and fields. The majority of these workers are employed in the cities of Bangkok, Surat Thani, Chiang Mai, Mae Sot, and Maha Chaing.

The new laws, caused an immediate exodus of more than 60,000 foreign workers—many from neighbouring Myanmar, Laos, and Cambodia—fearing arrest.

If something is missing, a worker has no hope of obtaining an official worker card.

28 year old migrant worker Aye Aung now faces this bureaucratic nightmare. “I have no ID card”, says Aye Aung.  “When I asked my township immigration officer what the process is, and how much I have to spend to get an ID card, he replied I have to give a family tree history and also a recommendation letter from the head person of my village. It will also cost about 100,000 Kyat (AUD$92) and I have to wait at least two months to get the ID card. How can I possibly afford for all these things?” Aye Aung is not alone. There are hundreds of thousands of similar cases among Myanmar migrant workers. The excessive cost, lack of documents, data and failure of government departments push many Myanmar migrant workers into illegal workers.

The Thai government as well as Thai small and medium business owners have benefited greatly from the exploitation of illegal workers from Myanmar for a long time. The Myanmar government attempted to change that situation in 2009.There was a Memorandum of Understanding (MOU) signed between the government of Thailand and Myanmar on cooperation in the Employment of Workers. Before 2009, Myanmar’s government didn’t allow job agencies to send Myanmar workers to Thailand but after the MOU employment agencies were able to send Myanmar workers.

There are still bureaucratic headaches for workers in this process. In the MOU, employment of workers requires prior permission of the authorised agencies in Thailand. Permission may then be granted upon completion of procedures required by law and regulations in Myanmar. The MOU also states that the authorised employment agencies shall be responsible for the administration of the list of workers permitted to work under this MOU. This leaves workers open to exploitation by unscrupulous employment agencies. The biggest failure of both governments is that they turn a blind eye to the tricks of these agencies and do not punish the exploiters.

“The service fees workers pay an employment agency are generally around 400,000 Kyat (AUD$370 or 8-weeks salary). I paid 200,000 Kyat to an agency in Myanmar and they said they would collect this amount in monthly instalments. I don’t like the MOU contract system as it feels like slavery. Supervisors always put pressure on the workers to work more and more. Workers feel trapped as they not only have a debt to their agencies to repay, but their work permits only permit them to work for their host employer. If workers feel like they can’t tolerate the work situation and want to leave their job, it is very difficult to move” explained Moe Thouk.

“My factory manager took my passport when I started my job and when I told him I wanted to leave; he said I couldn’t leave as I needed to work more to pay the agency debt. Before I came here, the agency said I would get at least 300 Baht (AUD$11.20) per day but in reality, I only get 120 Baht (AUD$4.50)” Moe Thouk is still working in the same Thai fishery factory under the MOU system.

“The Myanmar government needs to transform the procedures around migrant workers” advised Kyaw Thaung, a labour activist in Thailand.

“I would describe the migrant worker MOU reached between Thailand and Myanmar as a legal human trafficking ticket. My words may seem rude. But let me say to Myanmar’s labour ministry; If they think their present procedures are good and correct, come to a factory! I will show them whether the name of the owner written on the work book and the name of the real owner name is correct or not. To make the MOU more just and to repair this procedure, the government must punish corrupt servants and employment brokers and they must create a one-stop service” said Kyaw Thaung.

Kyaw Thaung believes that the solution to the high influx of illegal migrant workers entering and working in Thailand is not solved by the Thai government’s recent Decree. He suggests that simplifying the documentation process for Myanmar workers is the key. Kyaw Thaung explained that “the Myanmar government could help by creating links between workers and a bank. The worker could register a bank account, and then borrow money from the bank for the service charges to work in Thailand. When the worker is paid in Thailand, the business owner could then pay the salary via the worker’s bank account and the bank could deduct an amount each month to repay the debt.   This way the government gets tax from the money sent back and the worker is protected from being in debt to unscrupulous employment agencies”

It is yet to be seen what the total impact the Thai Decree will be. However whatever happens, 28-year-old Aye Aung is still interested in working in Thailand. Waving her phone in her hand she said “my boss has my phone number and all I have to do now is wait his call”

Read more from our Myanmar Labour Reporter under Myanmar Monitor.