In March 2021, Union Aid Abroad – APHEDA staff and activists participated in a number of solidarity actions, campaigns and petitions highlighting the deteriorating situation in Myanmar and demanding the Australia government take action. Here are some highlights:

On Saturday 27 March, the Australian Burmese Community gathered at Sydney Town Hall for the Justice for Myanmar Candlelight Vigil. Joining them were hundreds of supporters who, together with the speakers and performers, sang, chanted, and embraced moments of silence to remember the more than 300 civilians killed by the Myanmar military since 1 February (note: the number killed is now over 450. Saturday 27 March – the day of the Vigil – was the bloodiest day of the coup so far with over 100 people killed).

Among the speakers was event organiser Sophia Sarkis who said, “thank you all for coming here and joining with us today… you are sharing, hearing, feeling and seeing our pain… many innocent citizens have died.”

“We call on the Australian Parliament to immediately introduce targeted sanctions against military leaders, the military corporations MEC and MEHL, and against the family members of senior military here in Australia.”

Labor MP for Sydney, Tanya Plibersek also addressed the crowd “the military aiming for the heads of protestors with their bullets… unacceptable…. It is unacceptable that Australia, as a democracy and a strong power in our region, has said so little and done so little”.

The Sydney Vigil was reported on by The Wire. Listen to the audio report ‘Pressure Grows on Myanmar Military as Death Toll Rises’.

While the Sydney Vigil paid tribute to Myanmar’s fallen heroes and paid respect to all protesters who are willing to give up their life to restore democracy and fight against the Military Coup in Myanmar, on the same day in Melbourne an ‘Anti-Military Dictatorship’ rally took place in Federation Square. The rally in Melbourne highlighted the situation facing the people of Myanmar with signs and placards urging people to ‘Never Give Up!’ and called for the recognition of the Committee Representing Pyidaungsu Hluttaw (CRPH), the ousted body of elected MPs in Myanmar. You can support the call to recognise CRPH and demand the Australian government take action by signing and sharing this petition. 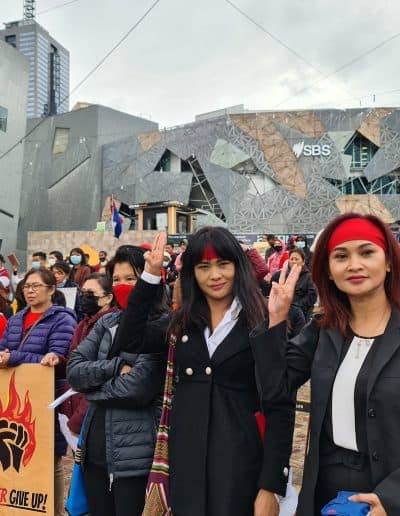 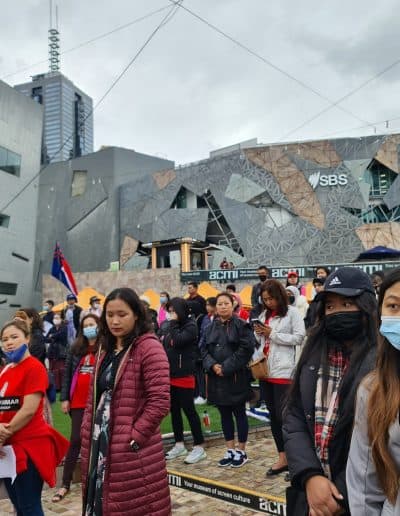 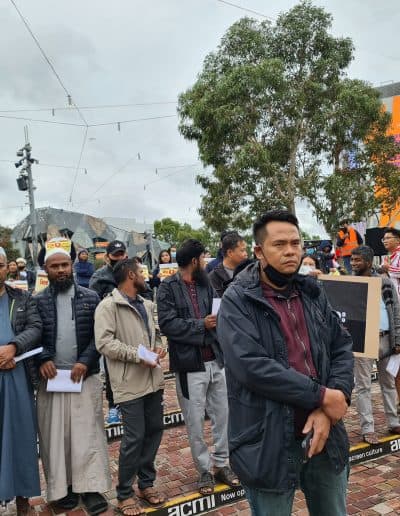 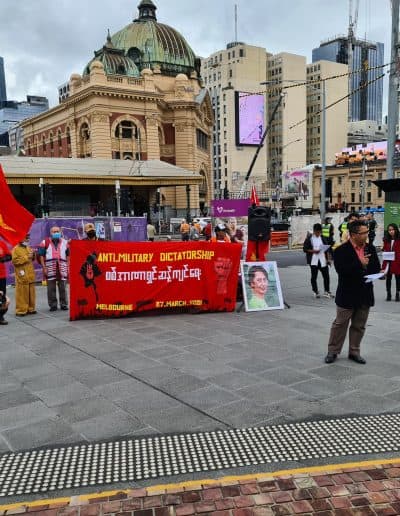 Above: images from Anti-Military Dictatorship rally in Melbourne (Thiha Yarzar)

On 24 March, the Financial Review published an article Chevron under pressure to stem Myanmar funds. Union Aid Abroad – APHEDA was one of more than 140 civil society groups signing onto a joint letter demanding Chevron cut off revenue flows to the Myanmar military. The letter reinforces calls from civil society groups in Myanmar and the Committee Representing Pyidaungsu Hluttaw (CRPH) for Chevron and other oil and gas companies not to legitimise the junta. It also called on Chevron to ensure that money from the oil and gas industry does not go to the Myanmar Oil and Gas Enterprise (MOGE) or the military.

APHEDA is part the Publish What You Pay Australia coalition of over 30 organisations that are part of a broader international campaign focused on anti-corruption and transparency in the mining, oil and gas sectors.

Clancy Moore from Publish What You Pay Australia was featured in The Wire talking about the connection between the Myanmar military and mining, oil and gas industries:

“There are many international oil and gas companies in Myanmar. This includes the US giant Chevron… the oil and gas sector in particular provides approximately $1 billion in revenue to the Myanmar government annually…” Clancy Moore, Publish What you Pay Australia

The international campaign against Chevron is ongoing and we will continue to provide updates on Facebook, Twitter and LinkedIn as they occur. We also have our sights set on Australian company, Myanmar Metals (read more).

Myanmar Youth Against the Coup

On 14 March, Myanmar communities and supporters came together and joined with Myanmar Youth Against the Coup for rallies in Sydney, Melbourne and Brisbane.

There was plenty of singing and chanting from both Sydney and Melbourne! The rallies were organised by Myanmar Students’ Association Australia, Next Gen Myanmar and the National Union of Students.

Since the start of the military coup, APHEDA has been raising the issue of Australia’s military cooperation program with Myanmar. When we launched the petition alongside the Australian Council of Trade Unions (ACTU) and Victorian Trades Hall Council (VTHC), it was the top demand as we called on Foreign Minister Marise Payne to end support to the military junta.

In early March, the ABC highlighted documents revealing the inside story of Australia’s defence cooperation with the Myanmar junta (read more) and Burma Campaign UK published a briefing paper with Australia listed among 12 other countries involved in training and cooperation with the Myanmar military. With pressure building, the Australian government announced it would be making major changes to its diplomatic relationship with Myanmar starting with suspending military ties. Read more 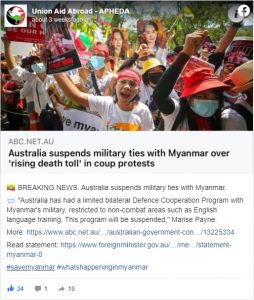 On Saturday 6 March, large crowds from Myanmar communities gathered at Martin Place in Sydney to speak out against the military coup in Myanmar. APHEDA’s Communications Organiser, Katie Camarena, was also there in solidarity delivering a speech reinforcing APHEDA’s solidarity and highlighting APHEDA’s demands of the Australian government (see petition).

One of the junta’s largest corporate collaborators, Australian energy giant, Woodside announced on March 1, it would ‘demobilise’ its operations. This was following a sustained pressure campaign and the threat of further public condemnation.

The large Myanmar community of Perth, together with human rights and union activists, mobilised in the thousands to maintain the pressure in demonstrations outside state Parliament. With the Woodside head office in Perth and Woodside being a major sponsor of the Freo Dockers, the company succumbed. 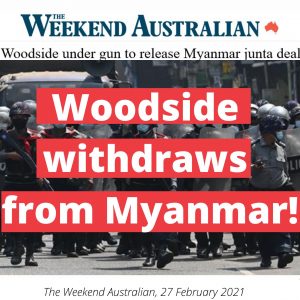