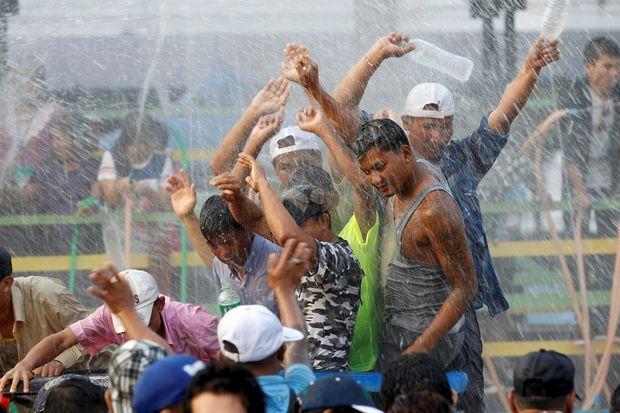 People play with water as they celebrate Myanmar’s New Year Water Festival of Thingyan in Yangon on April 13, 2016. (Reuters photo)

A number of Labour organisations from Myanmar’s Yangon Division have appealed to the Ministry of Labour stating that they can’t possibly agree with the Government’s announcement of reducing the Thingyan Water Festival from ten Public Holidays to five. For many workers in Myanmar this ten day break is an opportunity to return to home villages to visit family. Reducing the break to five days will prevent many of these workers from being able to make the journey home this year which can sometimes take days of travel.

Myanmar’s trade union confederations – the Confederation of Trade Unions Myanmar (CTUM) and Myanmar Industries Craft & Services Trade Union (MICS) – have both made their position clear to the director of the Labour Department at Pin-lone hall in Yangon. They stated that the decision to reduce the Thingyan holiday without consulting with workers and listening to their concerns is proof that the government doesn’t care about workers. They declared that when major decisions are going to be made, the government needs to take workers into account.

“Today I want to express to the Government via the ministry of Labor that in some factories, workers want to strike over this decision to reduce the Thingyan Water Festival holiday” said Ma Moe Wai, the Secretary of MICS. “The reason for the reduction given by the Government is that it will assist in the developing and increasing the national economy. The Government needs to understand that workers are fundamental to a strong economy and they should have been consulted before this decision was made”

U Myo Aung, the General Director of the Labour Ministry said that according to the Labour Law, the workers will get five public holidays during the festival and that employers should give workers five other public holidays throughout the year to compensate for the shorter leave over the festival. “I will discuss with employers and will surely tell them to give a total of 10 days of leave over the year; however this direction will be for this year, I can’t predict next year”.

Unions are now considering striking over the issue.