The Karen Women’s Organization (KWO) has over 70,000 members across Karen State, as well as in refugee camps along the Thai-Burma Border. The KWO is a community-based organisation providing services in all seven districts of Karen State, Burma. 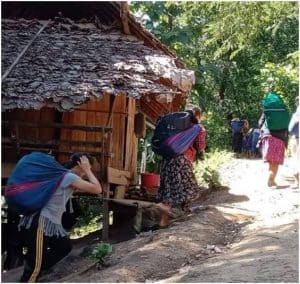 Since the military coup in February last year there has been a dramatic escalation of violence across Burma, with 6,675 armed clashes and conflicts recorded between February and November – more than in Afghanistan or Yemen. Pro-democracy supporters, participants in the Civil Disobedience Movement, labour unionists, journalists and elected MPs have been targeted, arrested, detained, tortured and killed. Communities in Karen State have been subject to persecution, looting, indiscriminate shelling and airstrikes, injuring civilians and forcing tens of thousands to flee. By December, it was estimated that over 111,000 people in Karen State were displaced and living in precarious circumstances. Many of them had to flee with minimal supplies and their biggest challenge has been accessing adequate food.

KWO has been able to identify the most urgent needs in their communities and worked tirelessly to support those who are struggling. KWO leaders, working collaboratively with civil society groups, have been able to provide emergency support to over 80,000 people last year. This included rice packs, dry food rations, water bottles and filters, tarpaulins for shelter, hygiene items and women’s sanitary packs. KWO particularly targeted support to women, children and the most vulnerable, including pregnant and breastfeeding women, people with disabilities and the sick. Many IDP’s had to walk significant distances to access supplies.

“We were in hiding for many days. Then some local leaders found us and gave us some food and materials we really needed. It made us feel so good that we were not forgotten, that we were not alone in our troubles. I don’t know how long we will have to stay here,” one displaced person said.

KWO’s work has been supported by funds from international partners, including Union Aid Abroad-APHEDA. Thank you to our supporters who have contributed to this critical work standing alongside communities in Myanmar.