The military junta has intensified its violent attacks on workers and trade unionists in Myanmar. Concerted action of the international community to demand the release of all political prisoners remains the top priority.

Union Aid Abroad- APHEDA and the Netherlands’ Mondiaal FNV have produced a series of infographics on the situation in the country. The infographics cover the total number of workers suspended, dismissed, arrested, and killed by sectors in the country. It also lists up the national companies and multinationals working in the country by ownership and investors

Although the statistic presented in the infographic do not reflect the actual numbers, which are higher than the data recorded, the infographic does nonetheless illustrate the massive scale of attack on workers and trade unionists after the coup.

The ITUC’s Global Rights Index 2021 has listed Myanmar as one of the worst countries for the working people, a major setback of what had been achieved during a decade of transition toward democracy from 2011-2021. Our priority is to keep organising concerted action by the international community to press the junta and demand the release of all political prisoners.

Along with that, we are also focusing on seeking justice for victims of extra judicial killings and arbitrary detentions. The international community, Myanmar unions and the parallel government of National Unity Government need to initiate discussion on measures to reform the law and legal institutions in Myanmar and on a mechanism to hold the State Administration Council, as an entity, accountable for perpetrating actions against human rights. All of this, within the frame of restoring democracy and guaranteeing the rights to freedom of association.

The situation in the country thus far

The junta is applying laws inherited from the colonial era such as the Penal Code and the Unlawful Association Act. Both have been frequently used to lock up workers and trade unionists who participate in the Civil Disobedience Movement, with a minimum three-year prison sentence.

The junta’s State Administration Council has referred to various sections of the military-drafted 2008 constitution to further justify its action. The declaration of a state of emergency and the enforcement of the martial law in townships in Yangon and Mandalay where major industrial zones are located, were carried out under section 419. Meanwhile the section 432 provides legal impunity for any actions taken by the military personnel under a state of emergency. Mobility restriction and ban of public gathering of more than five people in 31 townships in Yangon and other major cities across the country have been imposed since 8 October and carried out under section 144 of the constitution. At least two labour organisers and one worker were sentenced to life at the military tribunal. One prominent unionist, the General Secretary of Myanmar Industry Craft Service-Trade Unions Federation (MICS-TUsF) will potentially have his case tried at a military tribunal. 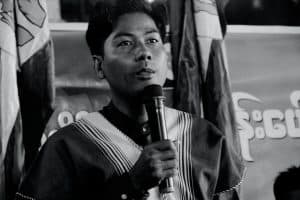 Thet Hnin Aung, the General Secretary of Myanmar Industry Craft and Service-Trade Unions Federation, was arrested in June 2021. He has been denied access to his lawyer and meeting with his family.

This flawed legal system has been a spectre haunting trade unionists, journalists, and critics in any given political circumstances in Myanmar. Indeed, the military, after the coup, have further abused the laws to justify their actions. According to Assistance Association of Political Prisoner-Burma (AAPP-B), on 25 October this year, 4065 victims have been released from prisons. On 1 November, AAPP-B recorded that 7013 people were still under detention with only 300 have been sentenced. Several workers and unionists are among those granted amnesty and released within October 18-22 while one unionist was re-arrested at the prison gate a minute after his release.