Twelve months following the military coup in Myanmar, the economy is in freefall with almost half of its population now in poverty according to the UNDP. Despite this, Australia stands alone amongst its UK, US, EU and Canadian allies in so far imposing not one sanction against the junta. 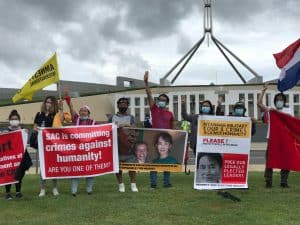 Rally outside Parliament House in Canberra in January 2022.

As revealed in a new economic briefer issued today by ALTSEAN on Burma and Union Aid Abroad-APHEDA, in the space of a year the brutal military crackdown has done more than murder 1,519 people and arrest 11,950. The impact of this protracted conflict and civil unrest has totally shattered the hopes of an economic future for its people.

“It is absolutely clear that the people of Myanmar want a return to civilian rule. The widespread and continuous Civil Disobedience Movement (CDM) is evidence this. But the iron fist of Min Aung Hlaing’s junta is determined to maintain power and with it, sole access to the country’s wealth and resources”, said Ms Kate Lee, Executive Officer of Union Aid Abroad-APHEDA.

“February 6 also marks the 12 month anniversary of the arrest of Australian professor, Sean Turnell who remains imprisoned in Myanmar. His continuing detention must be of serious concern to the Australian government, particularly as other foreign nationals have been released following their government’s imposition of sanctions”, said Ms Lee.

“This is the most serious economic disaster in Australia’s immediate region. Union Aid Abroad-APHEDA continues to join the united calls from across Australian civil society and its Myanmar diaspora representatives, for the Australian government to join its allies of the UK, US, Canada and the EU and impose targeted sanctions on senior military leaders and their military-owned businesses. To date, Australia has shockingly not imposed a single sanction”, said Ms Lee.

Read the fact sheet below: Burma/Myanmar junta destroys the economy