There have been some big developments in Cambodia’s Nagaworld campaign in the past month as international attention shines a spotlight on the repression of unions. 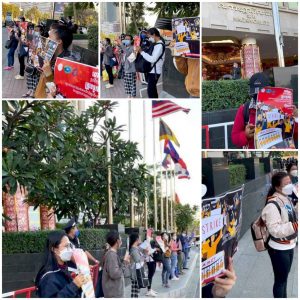 Delegates from the International Labour Organisation have arrived in the country as part of an international tripartite mission. They will hear concerns from independent unions and human rights workers about the deteriorating situation facing unionists in the country. With democratic space shrinking and restrictions on independent media tightening, unions are finding it harder and harder to exercise their rights to represent workers, organise, and take strike action.

Workers on strike from Nagaworld casino continue to hold daily pickets outside company headquarters. They are protesting against the unfair termination of 365 workers and the detention of union leaders.

Police carried out mass arrests of the workers on March 11 and again on March 16, detaining more than 100 workers each time. The striking workers say they will continue their protest until the company negotiates with their union, the Labor Rights Supported Union (LRSU).

In response to pressure from the international community to resolve the situation, the Cambodian government released 8 of the 11 trade union leaders who have been in prison since December. But charges against them have not been dropped.

In an attempt to sideline the union leading the campaign, NagaCorp and the Ministry of Labour have created a fake, company-controlled union, which was registered in record time. It is expected Nagaworld will forcibly deduct union dues from the majority of employees and the fake union will be allowed to act in “negotiations” with management.

The LRSU are continuing to seek the reinstatement of sacked workers and are calling for all charges against arrested unionists to be dropped.

Clarinda MP Meng Heang Tak MP attended the forum and the following week he raised the struggle of Nagaworld workers in Victoria’s parliament.  He told parliamentarians: “I join with other international voices condemning the actions of the company and the Cambodian government. I echo calls to the Australian foreign minister to maintain close engagement on this issue and to raise the arrest and charges at the highest levels of government.” You can watch his full speech here.