“We never knew. The factory owners told us it was safe”

Union Aid Abroad-APHEDA with the support of the Sydney May Day Committee and the Sydney Branch of the MUA recently welcomed friends from Indonesia – here’s a small grab from their very busy visit.

When Indonesian asbestos factory worker Bono took the stage at the Sydney Mayday event he was forthright – “We’re here because we share one common enemy. Our enemy is capitalism.”

Bono is the general secretary of SERBUK, an Indonesian trade union based in West Java.  It was only after working in an asbestos roof sheeting factory for 17 years that Bono learned asbestos was in fact dangerous – “We never knew. The factory owners told us it was safe”.

Asbestos was finally banned in Australia after a protracted struggle led by workers, their communities and their unions.  The struggle continues, the Asbestos Diseases Foundation of Australia estimates that in excess of 600 people died directly from asbestos poisoning in 2015, and that Australian asbestos deaths may not peak until 2030.

Devastatingly, the efforts at eradicating this poison from our communities are being undermined by illegal imports from economies in South East Asia where the asbestos industry is booming.

As long as the countries surrounding us are producing everyday materials containing this poison, new asbestos will continue to arrive in Australia.  As long as asbestos is being used in Australia, it will continue to kill working people and their families.  In February this year APHEDA launched ‘Asbestos. Not Here. Not Anywhere.‘.   Asbestos. Not Here. Not Anywhere. is about linking the work of campaigns across the globe to see asbestos bans country-by-country and globally.

We can only fully eradicate asbestos if we work together – workers, communities and unions – fighting the industry on the ground in the countries where it’s being used.  It is for this reason that the Sydney Mayday Committee with the support of the Sydney MUA invited Bono to Australia.

At a Sydney Branch meeting of the MUA Bono described the experience of confronting the asbestos factory owner in his office with a sheet of asbestos produced in the factory “the boss kept telling us that asbestos was safe, that there was nothing to worry about.  So I took a hand full of the dust from the floor blew it toward his face – he panicked and ran out of the room”.  It was that moment Subono knew his employer was lying.

Bono’s union SERBUK and activist OHS organisation LION are together spearheading the effort to get asbestos import and production banned in Indonesia – the world’s third largest consumer of asbestos after China and India. 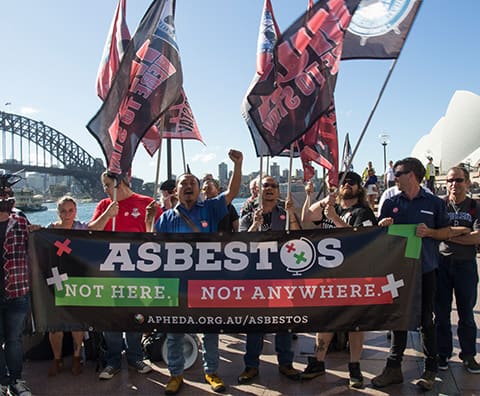 Above: Indonesian labour activists Bono and Darisman join the MUA for an anti-asbestos demonstration at Circular Quay in the lead up to Mayday 2016. Image: Jack Carnegie.

“[T]he boss kept telling us that asbestos was safe, that there was nothing to worry about.  So I took a hand full of the dust from the floor blew it toward his face – he panicked and ran out of the room”. 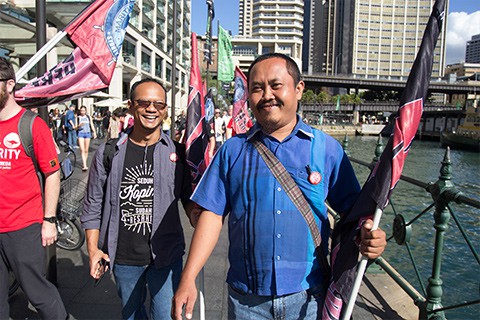 Darisman, an organiser from LION who accompanied Bono on his Australia visit, described the extent of the industry in Indonesia: “According to our mapping to date, there are at least 26 factories in Indonesia producing commodities containing asbestos which employ in excess of 100 people each. We believe that there is at least 7000 people working in factories that produce materials containing asbestos. And the factories are just the start.”

SERBUK and LION are together trying to build union support for the campaign in each of the 26 factories. They believe that unless there is an organised working class base leading the campaign, then a ban could potentially leave those most exposed to the poison also out of a job.  “Firstly, there must be provisions put in place for compensation for workers who get sick – and we know from international experience that there is going to be many, many workers and their families who will get sick.  Secondly, there must be support for the factories to be refitted to produce non-asbestos commodities, or support for the workers to re-train” said Darisman.

APHEDA is asking unionists in Australia to fund and be ready to take action in this important international work. Emily Mayo, APHEDA’s campaigns coordinator, laid open the invitation “The international asbestos industry is organised, wealthy and ruthless.  We can defeat this industry, but only if we’re organised, and we act together. APHEDA can help build resources, bring in expertise and build collective power that stretches across all of the countries in which this poison is being used. Join APHEDA. Join the campaign”.

You can join at www.apheda.org.au/join