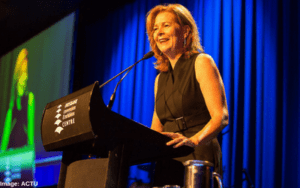 Most of the workers Michele represented were women, often migrant women working in low-paid jobs, and the textile industry has been at the forefront of globalisation – a laboratory for capital to test new ways to outsource jobs and take power from working people.

“These things are now normal in almost every industry – we see it with contract teachers and nurses whose skill and experience have been progressively undermined and we see it in the slave-like conditions of agricultural workers and the rampant wage theft in hospitality and retail industries.

“In my industry we changed the rules to win supply chain transparency – obligations for those brands at the top for the conditions of the workers at the bottom and rights for unions to enter sweatshops.”

“These are just some of the things we need to win in the rest of our workplaces.”

Elected at the July ACTU national congress, O’Neil follows on from Ged Kearney as ACTU President. Kearney won the Federal seat of Batman – since re-named Cooper – at a by-election in March.

Alongside Secretary Sally McManus, O’Neil will lead the movement for change and fight inequality, corporate greed, privatisation, and the decimation of public and community services. Together, Sally and Michele will spearhead our movement’s efforts to win fair pay, more secure jobs and better lives for working people.

Born in Melbourne, O’Neil is the youngest daughter in a family of five daughters – all, she proudly says, feminists. Her mother left school at 13 to work in a tannery in Melbourne and worked as a waitress, and in various other casual jobs while raising five daughters

Michele’s father was in the army as a young man, then was a lifelong  public servant and, briefly, an AFL administrator.

“My mum, dad and sisters taught me to stand up to injustice and to believe in the struggle for a fairer world and to never give up,” she says.

Michele remembers her mother working as a waitress at the Parliament House dining room in Canberra.

“I remember very clearly her coming home and telling me that you can tell what sort of person a politician was by how well they treated the wait staff. That stayed with me.”

Michele’s passion for social justice began early. Her sister took her to the Aboriginal tent embassy in Canberra when she was 10. She went to rallies and marches as a teenager to free Nelson Mandela from jail in South Africa.

She joined her union on the first day of her first after-school job as a waitress in Canberra at 14. It was the Union we know today as United Voice.

O’Neil’s experiences at that job made a lasting impression on her. She was repeatedly sexually harassed by her supervisor. Michele says she learned a lot about the power of the collective.  When she told the older women working alongside her what had happened, the union delegate and other members stood up with her and made sure the harassment stopped and she was safe.

“I learnt early that as as a union member you are never alone –  that unionism at its core is about workers sticking together. A powerful lesson in collective power,” Michele says.

Michele’s teenage years saw her work in restaurants, bars and clubs, as well as becoming active in social justice campaigns – from the anti-apartheid movement, to land rights and affordable housing campaigns.

In her 20s, she worked with homeless young people in the community sector and joined the ASU. Back in Melbourne she became the head of the National Youth Coalition for Housing.

“I understood what it was like to be a low-paid worker and to work in short term, casual and insecure jobs,” she says.

O’Neil had jobs sewing labels on jumpers and running a bank of knitting machines and worked with both the Clothing and Allied Trades Union and the Amalgamated Textile and Footwear Workers Union.

O’Neil went on to work for 28 years at the TCFUA as an organiser, a campaigner, a negotiator, and to be elected as a state and national secretary. In 2018 she led her union into an amalgamation with the CFMEU and MUA and became a CFMEU Vice President. She fought for secure jobs, the protection of workers entitlements, and stood up for workers facing factory closures. She has been active in global campaigns to hold fashion brands to account for workers safety and conditions and has represented her union in International Union Federations.

Among her wins, are landmark legislative changes in 2012 that mean workers in her industry – whether they worked from home, on in a factory – are entitled to the same minimum pay and conditions and can recover owed money up the supply chain.

“People deserve to be paid the same for doing the same work – that’s just basic fairness,” she says. “We won that in my industry, but workers all across the country now need this basic principle applied.”

Michele is energised and ready for the challenges that a national leadership role for the union movement brings.

“I’m passionate about changing the rules, getting rid of the Turnbull Government and growing our movement. Their attacks on working people and unions and their bias toward big business and the banks is something Australians can no longer afford,” she says.

“I have spent my life fighting for a better country and a better world. Along the way I’ve learnt about power, about change. and about solidarity.

“I know that when working people come together and act as one, no force in the world can stop us.”