A new minimum wage for Fiji?

The Australian union movement has raised $59,000 to support communities who lost their housing and livelihoods due to the recent Cyclone Winston. APHEDA’s Pacific Organiser, Katie Hepworth was recently in Fiji for the implementation of the appeal with the Fijian Trade Union Congress.  She was also there for the Fijian Trade Union Congress’s launch of their campaign to raise the minimum wage to FDJ $4/hr (AUD $2.60). The campaign is the first campaign launched by the Fijian trade union movement since the lifting of anti-union decrees in February 2016.

Minimum wage workers currently earn only FJD $2.32 per hour, or $92.60 per week. Analysis by the unions demonstrates that at this wage, a worker is unable to meet the costs of feeding a family of four basic subsistence rations. A basic shopping list prepared by the FTUC shows the family of a minimum wage worker living on rice, flour, dahl, and very limited protein – a few tins of either tuna or chicken. They estimate that a family with two minimum wage earners has to spend over 60% of their income on food.

Since Cyclone Winston hit the country in February 2016, destroying agriculture in the North and West of the country, the cost of fresh food has increased dramatically. This has impacted minimum wage workers most severely.

Already struggling to meet the basic costs of food, they have had to cut out a lot of fresh food and vegetables – replacing them with rice and other staples. While workers are able to meet their basic calorie needs each day, they are unable to afford the food that will provide them with the sufficient nutrients, despite working at least a 40-hour week.

The increase from $2.32 to $4 per hour may appear relatively huge. However, this just reflects the stagnation of wage increases due to laws passed by the Bainimarama government to limit union power. The decrees passed by the government limited the right to freedom of association and prevented unions organising inside key industries – replacing them with in-house unions. These laws were lifted in Feb 2016, following sustained pressure by the ILO, and the Fijian and international trade union movement.

We all know only an organised movement of workers can win increased wages and conditions. That’s why Union Aid Abroad-APHEDA stands in solidarity with the FTUC and union members of Fiji in their campaign to lift the minimum wage. 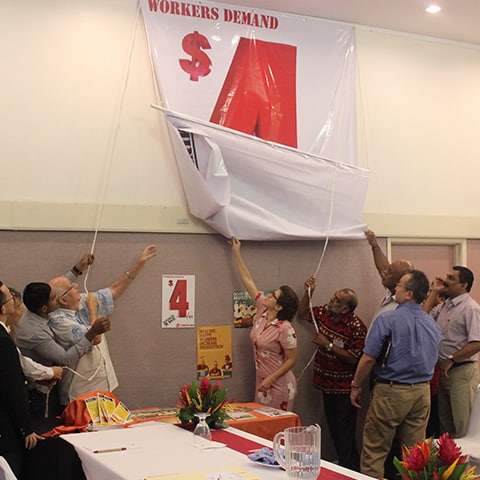