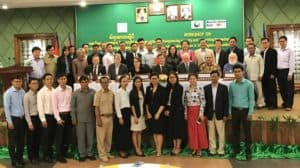 The visit started with a 5-day training workshop in Phnom Penh for high level government officials from 13 ministries in Cambodia together with trade union leaders and asbestos activists.

This interaction was duplicated in all the countries visited where the team met with government ministers, Australian and Canadian diplomats, government and civil society organisations engaged in banning asbestos in the respective countries.

The workshops and meetings on “Chrysotile asbestos” aimed to explain why it is vital to ban it as soon as possible in order to eliminate asbestos-related diseases in the South East Asia.

The visit has destroyed the misinformation being spread by the asbestos lobby across Asia that there can be “Safe Use’ of asbestos. Asbestos is promoted as a safe product by the industry lobby when the World Health Organisation and the International Labour Organisation both resoundingly denounce its ongoing use as a danger to human health. Visiting Canadian scientist Professor Yv Bonnier Viger completely destroyed this myth by sharing the background behind the Canadian government’s decision to ban all asbestos from 2018.

The strong message conveyed by the expert team is that if asbestos is safe to use, there will be no mesothelioma deaths around the world. There is overwhelming independent research evidence to prove that it is not possible to use asbestos safely. After decades of supporting the industry, the Canadian government has decided to ban asbestos by 2018 because there is no possibility of “safe use”.

The team also exposed the lie spread by the asbestos lobby that alternative products are costly, not durable and that the banning of asbestos will result job losses. The expert team provided concrete evidence to the contrary. There are 5 factories in Thailand and 2 in Vietnam which are already producing non-asbestos roof sheets and exporting these to South Korea, Japan and India. There is a huge market in these countries for asbestos-free products.

The input by the expert team has added momentum to the united effort to ban asbestos across the Asia region. The team’s composition reflected the support of the Australian government through the Department of Foreign Affairs (DFAT), the Australian Government Asbestos Safety and Eradication Agency (ASEA), Right On Canada, the International Ban Asbestos Secretariat (IBAS), Asia Ban Asbestos Network (ABAN), Asia Monitor Resource Centre (AMRC) and Solidar Suisse.

The depth of experience, breadth of expertise and integrity of the expert team led to the strength of the campaign tour. The tour facilitated the formation of new partnerships with the government ministries, trade unions and other civil society partners who are willing to work together to eliminate asbestos-related diseases from the region. The asbestos industry lobby group is now countering the strength and power of this new momentum by playing their big cards, and calling on the president of Russia and Russian government officials to put pressure on these nations not to ban Chrysotile asbestos.

In Australia, despite having an asbestos ban since 2002, imported products regularly enter Australia containing asbestos. A Senate inquiry is underway looking at how this can be better regulated. Over 60% of the raw asbestos mined globally ends up being manufactured in Asia. Australia trade figures shows that over 50% of good entering Australia come from countries which have not banned asbestos use. Australia’s asbestos ban is undermined as long as asbestos is traded globally. The only way to protect Australians from more asbestos exposure is a global ban or failing that, country level bans.

Union Aid Abroad-APHEDA will continue to build on this momentum to rid the region of asbestos so that the burden to workers, their families and communities can end.

Find out more about our campaign “Asbestos. Not here. Not anywhere”