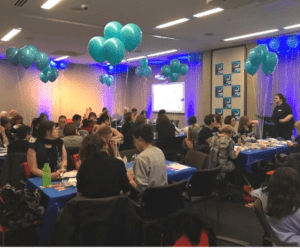 For the second year in a row, the NTEU Vic Branch hosted a Feminist Trivia Night for Bluestocking week on August 14 with all funds this year going to Union Aid Abroad, APHEDA partner, the Working Women’s Centre of Timor-Leste (WWCTL). This year they were joined in Global Solidarity by the NTEU ACT Branch who hosted their own event the following night in Canberra on August 17th.

Both events were very well attended and plenty of great moments from both trivia nights were captured and shared on Social Media, highlighting current and newly minted members of Union Aid Abroad APHEDA as well as sharing the fun and shenanigans of those in attendance at both events.

The team from the Working Women’s Centre were travelling in Oecusse while both events were being run but took some time out to make this great Solidarity video from their door knocking and surveying of Domestic Workers.

The work of the WWCTL was highlighted in APHEDA’s E:News earlier this year when they held an event on July 16 in Dili to promote International Domestic Workers’ Day including a large public meeting and performances about the experiences of Domestic Workers in Timor Leste by the core Domestic Workers activist group who meet regularly at the WWCTL.

Along with organising and surveying domestic workers across the major cities of Dili, Suai and Oecusse, the main focus of the WWCTL at the moment is to make submissions regarding the draft legislation (the first of its kind) to enshrine labour rights and recognition for Domestic Workers in Timor Leste. Their commitment and campaign activity of the WWCTL to this point have led to the Government taking the concerns of this non-recognised employment sector seriously and drafting the first bill.

To ensure that Timorese Domestic workers receive at least the same recognition and rights as other workers under Timorese Labour law, however, is still a work in progress. The team at the WWCTL is working hard to consolidate their submissions for improvements to the current draft. To strengthen their voice, the WWCTL have also formed an alliance with other NGOs in Dili working on Women’s Rights who are meeting regularly to share resources and skills. Their relationship with the General Workers Union in Timor Leste (SJTL) including a member on their board will also assist to progress the recognition of these workers and their rights at work.

APEHDA would like to congratulate both the NTEU Victorian and ACT branches for taking the initiative to run their own fundraisers this year and especially thank the organisers in both states for their hard work to make everything run smoothly on the night.