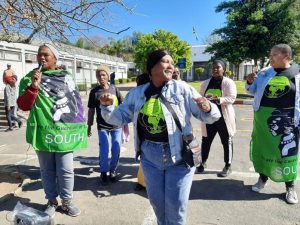 Women from the Rural Women’s Assembly singing songs on a picket line to spread the message about the One Woman, One Hectare campaign.

Union Aid Abroad – APHEDA has a long partnership with the Trust for Community Outreach and Education (TCOE) in South Africa, which is a southern African hub for the food sovereignty movement and for the global small farmers’ and peasants’ movement.

TCOE comes from organising done by Steve Biko during Apartheid and identifies as a feminist and agro-ecology organisation, campaigning for equitable access to land, water, food, jobs and knowledge. TCOE aims to support, contribute and catalyse movement-building processes that can meaningfully challenge systemic dispossession, the skewed land holding patterns in South Africa and the disconnection of communities from the natural resources and commons in the country.

TCOE works to organise and build capacities of the Southern Africa Rural Women’s Assembly in several countries, six local unions of small farmers and fisherfolk in three provinces of South Africa, the union of farm workers, and Inyanda, the National Land Movement. In the small-hold farmer’s unions, TCOE helps with education on agro-ecological methods.

A Rural Women’s Assembly delegation met with local government about the One Women, One Hectare campaign.

Rural women in South Africa have been mobilising around land reform, with the slogan of One Woman, One Hectare. This is at a time when the Russian invasion of Ukraine has led to a reduction in grain and fertiliser supplies across Africa, causing food prices and hunger levels to rise.

Since the Covid-19 pandemic, poverty in rural African households has gotten worse, especially in households headed by women.

The One Woman, One Hectare campaign links the issue of land reform to wider issues that affect women. For example, when women have access to land, they can grow and sell food for a living, allowing them to become financially independent. This independence plays a crucial role in combatting gender-based violence as it can allow women to escape domestic violence.

The Rural Women’s Assembly is demanding action on the 2018 UN Declaration on the Rights of Peasants and Other People Working in Rural Areas, around three issues. The right to own seeds, the right to food and food sovereignty, and the right to land, water and other resources

The Rural Women’s Assembly said in a statement: “Instead of placing our survival and sovereignty in the exploitative hands of agro-industries and mega seed companies, we promote alternatives such as agroecological local food systems.

“We proclaim that poverty and hunger are “man-made”, created and maintained by a capitalist system which continues to plunder the planet in the relentless pursuit for profits, at the expense of people’s lives.”