Food and Service Workers Organising for Human Rights in Cambodia 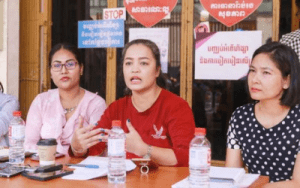 The Cambodian Food and Service Workers’ Federation (CFSWF) is an independent union federation of food and service industries organising to improve working conditions, wages, and occupational health and safety. As the main representative of one of the most vulnerable groups of workers in Cambodia, Union Aid Abroad – APHEDA has collaborated with CFSWF since 2011, successfully extending labour protections to entertainment workers (Prime Ministers Decree 194) for the first time in Cambodia. Since then, APHEDA has continued to support CFSWF’s efforts to organise workers to claim these rights.

Despite many employers blocking CFSWF activities to avoid compliance with the labour code, Union Aid Abroad – APHEDA has helped to improve workers understanding of their labour rights, including leave entitlements and OSH as well as building skills to negotiate with employers and resolve disputes. At present, CFSWF has 4382 members from entertainment, food and beverage manufacturing and General Service industries with 2464 female members and 1918 male members.

For International Women’s Day, and in response to calls for better conditions for women workers, CFSWF along with 20 civil other society groups, unions and human rights associations had signed a petition, calling for better child care, shelters for victims of domestic violence, prevention of sexual harassment in the entertainment industry and an end to violence against female human rights defenders.

A march of more than 200 people delivered the petition to government demanding respect for human rights and the release of detained female human rights defenders.

This exciting and challenging new program moves APHEDA’s work in Cambodia away from a long and successful Vocational Education and Training (VET) program towards Trade Union Building and Women’s Rights. The VET program is now fully sustainable and has been handed over to our partner organisations. It is a testament to the commitment and technical capacity of APHEDA Cambodia and all partner organisations involved.